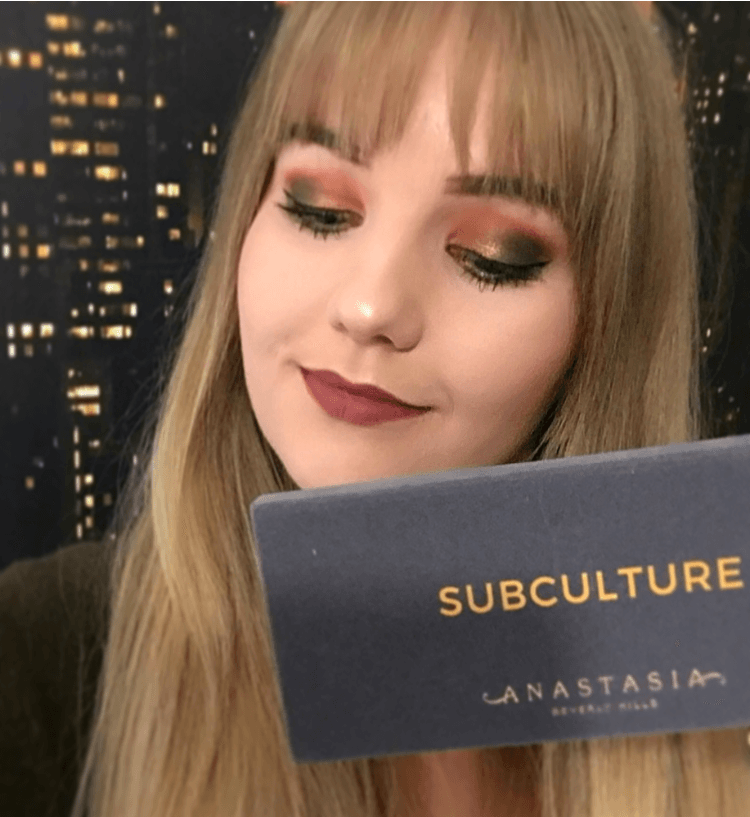 Today I will be reviewing the controversial Anastasia Beverly Hills Subculture Palette!

I bought this palette the day it was released. Yes, I was one of those people constantly refreshing the page in a panic and yelling at my phone whenever it crashed. I also had 3 other people on standby who were also refreshing and trying their best to get this palette for me. After almost an hour had passed and I was starting to lose hope, my sister finally managed to get through and add the Anastasia Beverly Hills Subculture Palette to the basket and checkout. It was official, the palette was mine!

The Anastasia Beverly Hills Subculture Palette arrived a week later, and in that week the terrible reviews were rolling in. Alissa Ashley’s video was everywhere and it seemed like everyone was having the same issues. The palette seemed to be way too powdery, un-blendable and hitting pan after a couple of uses. It’s safe to say I was very nervous. £42 had come out of my account, which is pretty sly of ABH since it’s also $42. I was certain this palette was going to be awful and I was going to be devastated.

When the palette arrived I was worried it would be broken. I knew some people had received damaged palettes. Thankfully, mine was perfect and the colours were absolutely stunning. I was immediately drawn to ‘Axis’, the dark teal blue, and ‘Electric’, a pale green shimmer.

The first thing I did was, of course, swatch all the gorgeous shades. As you can see in the picture below most of the shades are extremely pigmented. The only shades that are lacking in pigment are ‘Electric’ and ‘Cube’. ‘Cube’ is described as a duo chrome pink but it just didn’t show up on my arm at all. Overall though I was really impressed with the swatches. So far I had no complaints and was excited to play with them.

When the time came to create a look I hoped for the best. I took my most trusted Spectrum fluffy brush and very gently tapped it into the shade ‘Roxy’.  Nothing extreme happened. It was definitely powdery but no different to Modern Renaissance. I didn’t feel the need to swirl my brush around in the pan as a couple of taps picked up more than enough product.

I used ‘Roxy’ as a transition shade in my crease. It blended out softly, wasn’t patchy and I wasn’t getting that strange line of product that so many people seemed to get. With the same brush, I used the colour ‘All-Star’ on the outer corner and to deepen the crease. Then I used ‘Untamed’ also on the outer corner, working my way toward the lid. On the lid, I used Electric with a flat Spectrum brush. The pigment with this shade took some building up but the end result was so striking and I was very happy with how this look turned out.

For my second look, I wanted to create something more dramatic.  So I went straight in with ‘Axis’ on the outer and inner corners and the lower lash line, blending it out to get that pointed shape. I did get some fallout with ‘Axis’ with it being such a dark colour, but it wasn’t enough to really bother me. Next, I used ‘Edge’ and applied this to the centre of my lid, as an attempt at a halo eye. I also used ‘Edge’ on my lower lash line too. Again, I really liked the outcome of this look. While it’s not one I would wear out in public it was fun to do.

The last look I did with this palette is possibly my favourite so far. I used ‘Roxy’ for the transition shade and then ‘Destiny’ for the outer corner. ‘Destiny’ was harder to blend and it did look patchy in some places. I had to pack on more colour and then blend it out with a very light hand. Lastly, I used ‘Adorn’ for the lid which is such a beautiful colour. I cannot fault that shade at all!

The only colour that I cannot get to work for me is ‘Cube’. It just doesn’t show up on me at all! Apart from ‘Cube’, I haven’t really had a problem with Subculture. The pigment of these shadows are amazing, they blend well together and it’s such a fantastic colour scheme for Autumn and Winter. I did experience some fallout but nothing drastic or different to Modern Renaissance.

The picture below shows what my palette looks like after 3 uses. As you can see I’ve had no major kickback and there’s still plenty of product. The batch number on my palette starts with P7, which I have heard is the ‘good’ batch while palettes with the number P3 are the ‘bad’ ones. I don’t know how much truth is in that rumour, but since my palette has worked pretty perfectly I can only assume it’s true.

In my honest opinion I would recommend this palette but wait until the next batch is released. Norvina, the president of ABH, is currently doing what she can to fix the issues so that the next batch will, hopefully, be up to the high standards everyone expects from the company. Personally I’ve had no problems and I adore this palette. The colours are beautiful and a breath of fresh air with all the warm tone palettes out there right now. I feel like this will be a staple during Autumn and one that I will be reaching for again and again.