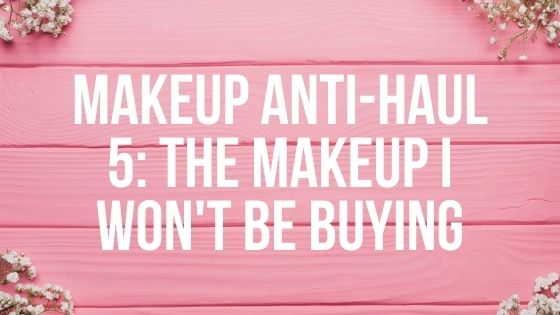 Makeup Anti-Haul 5: The Makeup I Won’t Be Buying

We’ve all experienced the high hopes and excitement for a new makeup release only to be bitterly disappointed. Sometimes brands just completely miss the mark or release something similar to other products that we’re just not interested in. So, today I thought I’d share with you my latest makeup anti-haul of all the products I definitely won’t be buying.

Where do I even begin with this trainwreck? As an avid Sims player, I’ve been playing since the Sims 1 days, I was thrilled at the idea of a Sims makeup palette. I thought it’d be so much fun with bright, bold colours and cartoon-style packaging. But, what Mac released was the total opposite. I really don’t know what they were thinking with this palette! It’s probably one of the biggest makeup fails I’ve ever seen. I know in the game they released some new makeup looks and styles which were really fun to play around with, but what they released for people in real life was just a joke. Did people at Mac genuinely think this was a good idea? Have they never actually played the Sims before?!

Not even the shade names relate to the Sims. You’ve got Moon Rock, Copper Aura, Sugared, Quarry, Soot…absolutely nothing to do with the game! They could’ve used names like Pumbob, Grilled Cheese, Sul Sul, Motherlode, to actually represent the Sims. Honestly, everything about this palette is just an embarrassment. It had so much potential and they could’ve gone all out with it. But, instead, we were presented with a lazy, wishy-washy disappointment.

The first release from ABH this year and it’s…an ice white highlighter, clear lip gloss and a brow gel. Um, can we say boring?! Seriously who even needs an icy white highlighter these days? Not only is it something that’s been done a million times over, but haven’t we moved past that trend now? Correct me if I’m wrong, but I feel like most people are more into natural glows from within kind of styles rather than glowing to the high heavens. Plus, with no actual swatches of the product yet, just their digitally edited one it’s hard to really see what it’s actually like. In their images, it looks more golden than the ice they’ve described so it’s a little confusing/misleading.

I also can’t picture many people paying £21 for a clear lipgloss when you can get those everywhere for a lot cheaper, there’s nothing special or unique about it that would make me want it. And, the same goes for paying £24 for the brow gel which is supposed to help you achieve the soap brow look…but using actual soap which is so much cheaper can get you the same look. I feel like they just really missed the mark with this release. It’s boring, outdated and not at all inclusive either.

This product makes me laugh as it just feels like such a scam. £22 for a lip oil that literally just contains Vitamin E and Coconut oil. Why are people buying/entertaining this idea? These ingredients are so cheap and you can get much better products for less. Plus, if you’re in the UK, you’ll also have to pay shipping and potentially customs on top of that too. It’s just so not worth it. It’s unoriginal, not exciting in the slightest and honestly, her whole skincare range is extremely questionable in my opinion.

Okay don’t get me wrong, I love Pixi skincare products…but who can honestly say they use a lip palette these days? I get that it’s a multi-use palette and can be used as both a lip and cheek tint but it still seems unnecessary and outdated. Also, with so many shades in this palette, I feel like the majority of them won’t be used at all which seems a little wasteful. It looks as though there are a lot of similar shades, which I guess you can mix and match but it’s just really not my kind of thing. Just like most things these days, it’s not exciting, it’s not new or different or innovative and I have zero interest in it.

Please remember that these anti-haul products are just my personal opinions. If you don’t agree or you love the look of the products mentioned then that’s okay! You do you!

Let me know your thoughts on the products in my anti-haul, I’d be very curious to know. I hope you all enjoyed this post. If you did then don’t forget to subscribe to Beauty and the Bookshelves. You can also follow me on Instagram, Twitter and Pinterest too. Thanks for reading!