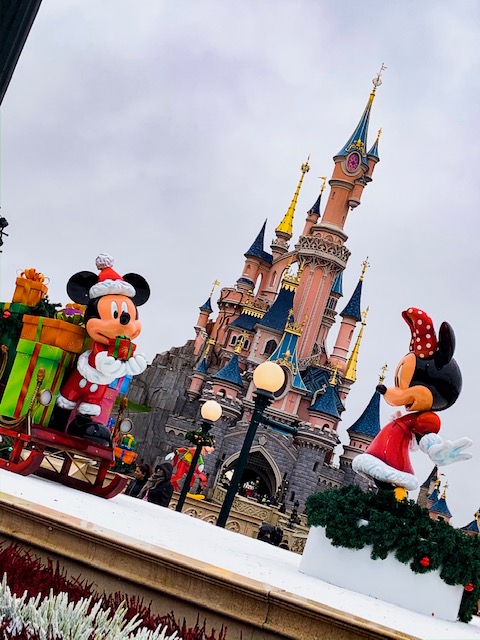 Disneyland Paris is a magical place all year round, Christmas at Disneyland Paris however is so much more! It really is the most wonderful time of the year there. With the entire park elaborately decorated, characters in cosy Christmas outfits and festive music playing throughout the day. It’s impossible to not get in the Christmas spirit while you’re there.

I was lucky enough to be at Disneyland for my birthday last month, while the Christmas celebrations had just begun.

After leaving the house at 3am to catch our flight at 6:30 we arrived in Disneyland at around 10:30am so after checking in we had the entire day to explore.

We were staying in the grand Disneyland Hotel. I had stayed there before with my family but Jaz hadn’t so it was a brand new experience for him. The hotel was all decorated for Christmas with a huge Christmas tree in the lobby, a giant gingerbread house and garland all across the staircases.

I had never seen the park decorated for Christmas before and it was stunning! The tree they had in the central plaza was probably the biggest tree I’d ever seen. Giant wreaths and garland hung between the buildings in Main Street which featured a special, snowy surprise, and even the lamp posts were looking extra festive.

We spent the first day exploring, wandering around the park, browsing the shops and making lists of everything we wanted to do and see. The first stop was the castle. I love the Sleeping Beauty themed stained glass windows, they’re so pretty, and we paid a visit to the dragon in the dungeon. There is also a Christmas shop inside the castle which has some beautiful Disney decorations.

After spending the day exploring the entire park and going on rides it was then time to see the daily 5pm parade. The parade is one of my favourite parts of the whole day and is something I refuse to miss! The sun was starting to set so the lighting made everything look even more beautiful.

The 12th was my 27th birthday and it started with a delicious buffet breakfast with a view of the castle and the giant Christmas tree. We spent the morning going on rides such as the Buzz Lightyear Laser Blast, Peter Pan, Snow White, Pinnochio and my personal favourite The Phantom Manor. As we were staying in the Disneyland Hotel we had the extra magic hour which means we are able to go into the park an hour before it opens and avoid any long queues.

I also got to meet Woody this day which I was thrilled about! He was very excited when he spotted my tiara too. Whenever a character sees you wearing a tiara they get all flustered and happy and treat you like a princess. It’s always a lot of fun haha.

At midday through Main Street, the Christmas Parade was happening which was magical! Fake snow fell from the wreaths, there were dancing Christmas tree girls, Tinkerbell in her Christmas outfit and of course Santa Claus himself!

In the afternoon we headed over to the Disney Village which had Christmas market stalls and several spots for a festive photo.

That evening Jaz and I had a table booked in the Inventions restaurant for the character dining buffet. We met lots of characters including Mickey and Minnie, Eeyore, Geppetto and Goofy. Jaz had also arranged a surprise birthday cake which was brought out by one of the employees and Goofy. The section of the restaurant we were in all sang Happy Birthday and Goofy did a little birthday dance haha. It was amazing and the cake tasted great too!

I hope you all enjoyed this post! There will be a Christmas at Disneyland Paris 2019 Part 2 tomorrow. There was way too much to write for one post haha. Let me know in the comments if you’ve been to Disneyland Paris at Christmastime or if you’re planning on going! While you’re here don’t forget to subscribe to my blog. You can also follow me on Instagram, Twitter and Pinterest too. Thanks for reading!