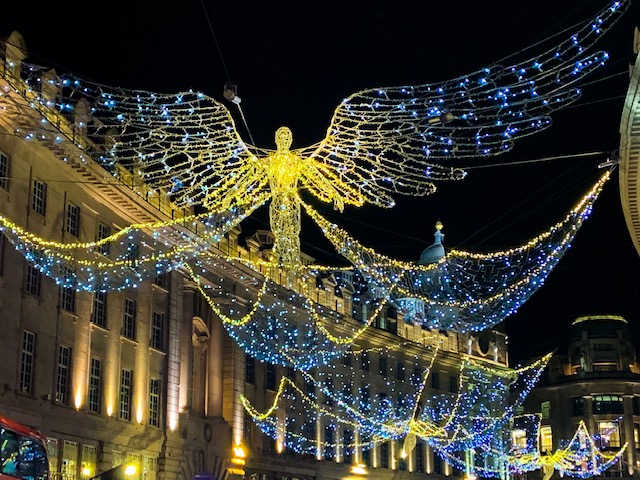 Since moving to Essex one of the top things on my bucket list was to see the London Christmas lights! Every year I see so many incredible pictures across social media of the London lights and they look so magical. I’ve driven through them in the past but have never had the time to just stop and really admire them.

Our first stop was Oxford and Regent Street which is where the magnificent angels are. However, while we were on our way there we came across a very fancy and festive looking hotel who’s lights were mesmerising!

The Oxford and Regent Street angels are just as captivating in real life at they are in the pictures. I couldn’t help but take pictures of pretty much every angel we walked past haha. It’s incredible seeing them close up and releasing just how big they are. They were so, so pretty and I felt pretty Christmassy after seeing them.

All the way down Oxford Street there are also signs that are all lit up and change from saying things like ‘Oxford Street’ and ‘Festive Feelings’ which I thought was really cute.

Carnaby Street is probably the coolest place I’ve ever been, it’s so fun and quirky. Last year on my birthday I was lucky enough to see the Bohemian Rhapsody themed lights and this year they have an ocean/Project Zero theme which looks pretty amazing!

Harrods, otherwise knowns as the greatest store in the world (please tell me I’m not the only one who knows and LOVES that Christmas movie?!) is lit up all year round but there’s just something extra special about it this time of year. It always looks so beautiful and is a real crowd stopper. A huge Christmas tree sits on top of the entrance looking as grand and majestic as the rest of the store.

I hope you all enjoyed this post! Let me know in the comments if you’ve ever seen the London Christmas lights! There’s no denying how beautiful they are. I will 100% be making the effort and coming back again next year to see them. While you’re here don’t forget to subscribe to my blog, I’d very much appreciate it. You can also follow me on Instagram, Twitter and Pinterest too. Thanks for reading!