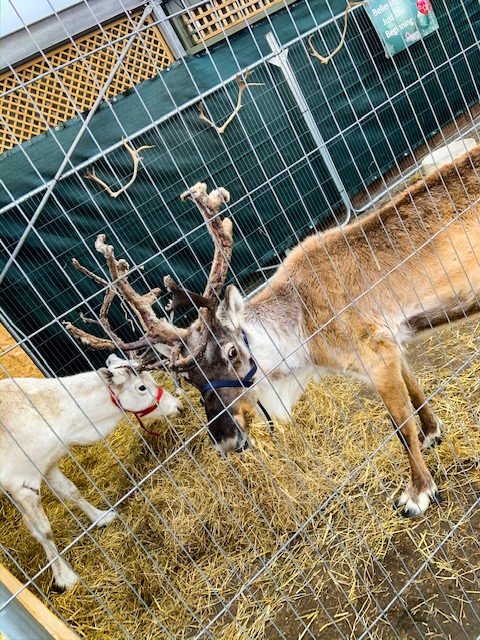 One of my favourite things to do this time of year is to visit garden centres to see their Christmas displays. If you’re ever struggling to get into the festive spirit visiting your local garden centre and seeing the beautiful displays is sure to get you feeling Christmassy. This year, as I’m now living in Essex, I’ve visited quite a few new garden centres, all of which have been super festive. My favourite one I’ve visited, however, is the Thurrock Garden Centre.

Featuring 5 themed sections, from winter wonderland to mystical magic, a festive pantry, decorations to suit everyone’s taste, real Christmas trees, Santas grotto and animal experiences. Thurrock Garden Centre is a must if you’re around the Essex area this Christmas.

For today’s Blogmas post I thought I’d share with you all some of my favourite pictures from our trip.

As soon as you enter the garden centre you’re in a winter wonderland. Polar bears, penguins, frosty trees and pretty light whites fill the room. I really wanted to bring back one of the giant polar bears haha.

So many pretty decorations! It’s impossible to choose just a few.

One of my favourite parts was this little fake outdoor display. I thought it was really cute and would love the outside of my house to look like that!

They also had some pretty spectacular trees, including this giant traditional one!

While I’m not generally a fan of pink and white themed Christmas I have to admit this carriage, laden with decorations, looked pretty magical.

This little winter wonderland section was outside, at the entrance to Santa’s grotto. You do have to pay extra to see Santa and the animals which I think is pretty standard. Jaz and I weren’t too fussed about seeing Santa this time around, so we paid £1 each just to see the animals.

Inside there were the cutest little shetland ponies! They were quite excitable animals and loved the attention we were giving them. There were a few signs around saying not to touch the animals. However, after asking the woman at the till if we could she agreed as long as we used the hand sanitiser after. There was no way I was able to resist stroking the ponies and the little donkey. They were just too adorable.

This pretty little entrance leads to Santa Claus himself! Obviosuy Jaz and I hadn’t paid to go through but I had to take a picture.

Outside, toward where the real Christmas trees were, there were more displays and we were lucky enough to see some reindeer! According to the signs, these two were Donner and Blitzen. They were absolutely beautiful and we stood watching them for ages.

I hope you all enjoyed this post. Let me know in the comments if you’ve visited any festive garden centre displays this year, or if you’ve been to the Thurrock Garden Centre before. While you’re here don’t forget to subscribe to my blog. You can also follow me on Instagram, Twitter and Pinterest too. Thanks for reading!