5 Books to Read this Halloween 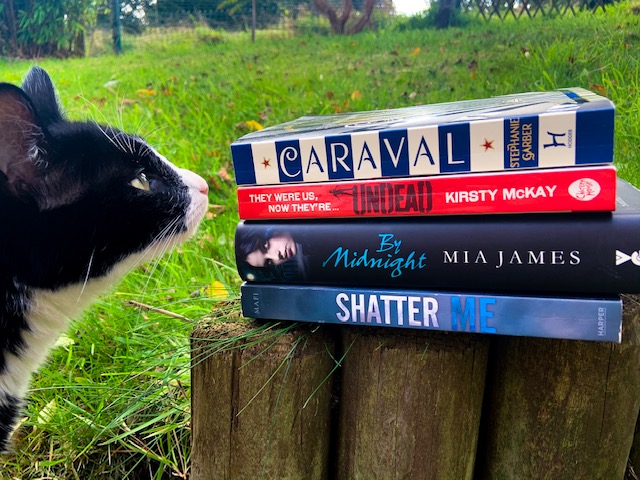 If you’re looking to read something a little spooky, a little creepy or just a little weird I’ve got you covered with these 5 books to read this Halloween!

One night, Annie went missing. Disappeared from her own bed. There were searches, appeals. Everyone thought the worst. And then, miraculously, after forty-eight hours, she came back. But she couldn’t, or wouldn’t, say what had happened to her. Something happened to my sister. I can’t explain what. I just know that when she came back, she wasn’t the same. She wasn’t my Annie. I didn’t want to admit, even to myself, that sometimes I was scared to death of my own little sister.

I wrote a full review on The Taking of Annie Thorne very recently. This was a very thrilling, almost gruesome, book that kept me on the edge of my seat the whole time. If you’re looking for a classic horror story with a very creepy feel this is definitely the book for you.

Juliette hasn’t touched anyone in exactly 264 days. The last time she did, it was an accident, but The Reestablishment locked her up for murder. No one knows why Juliette’s touch is fatal. As long as she doesn’t hurt anyone else, no one really cares. The world is too busy crumbling to pieces to pay attention to a 17-year-old girl. Diseases are destroying the population, food is hard to find, birds don’t fly anymore, and the clouds are the wrong color.’

The Reestablishment said their way was the only way to fix things, so they threw Juliette in a cell. Now so many people are dead that the survivors are whispering war – and The Reestablishment has changed its mind. Maybe Juliette is more than a tortured soul stuffed into a poisonous body. Maybe she’s exactly what they need right now.

This book is not to everyone’s taste, but I really enjoyed it and the rest of the series. It took me a little while to get into it but I thought it was really uniquely written and pretty creepy too. I’d 100% recommend this book if you want something that’s a bit strange and away from the norm.

Scarlett Dragna has never left the tiny island where she and her sister, Tella, live with their powerful, and cruel, father. Now Scarlett’s father has arranged a marriage for her, and Scarlett thinks her dreams of seeing Caraval—the faraway, once-a-year performance where the audience participates in the show—are over.

But this year, Scarlett’s long-dreamt-of invitation finally arrives. With the help of a mysterious sailor, Tella whisks Scarlett away to the show. Only, as soon as they arrive, Tella is kidnapped by Caraval’s mastermind organizer, Legend. It turns out that this season’s Caraval revolves around Tella, and whoever finds her first is the winner.

Not only does this book have one of the most beautiful covers I’ve ever seen, but it’s also a great read! It’s a real page-turner that will keep you guessing the whole way through. It’s dark, action-packed, fantasy-filled and mesmerisingly written.

April Dunne is not impressed. She’s had to move from Edinburgh to Highgate, London, with her parents. She’s left her friends – and her entire life – behind. She has to start at a new school and, worst of all, now she’s stuck in a creepy old dump of a house which doesn’t even have proper mobile phone reception.

But there’s more going on at Ravenwood than meets the eye. Practical jokes on new students are normal, but when Gabriel saves her from something in Highgate Cemetery, and then she discovers that a murder took place just yards away from where she had been standing, April has to wonder if something more sinister is going on and whether or not she’s going to live through it.

By Midnight is a thrilling mystery with plenty of twists and turns. Despite being marketed as a paranormal romance there’s actually very little of that. It’s a slow burner with plenty of world-building and character development but I finished it very quickly and think it’s definitely worth a read this Halloween!

When their ski-coach pulls up at a cafe, new girl Bobby and rebel Smitty stay behind. They hardly know each other, but that changes when they see the others coming back. Something has happened to them – something bad. Soon, only a pair of double doors stand between those on the bus and their ex-friends outside.

The Undead series by Kirsty Mckay sits in the horror-comedy section. It’s a really fun read, with parts that made me laugh out loud, filled with action, a very big twist, and extremely close calls that had me holding my breath.