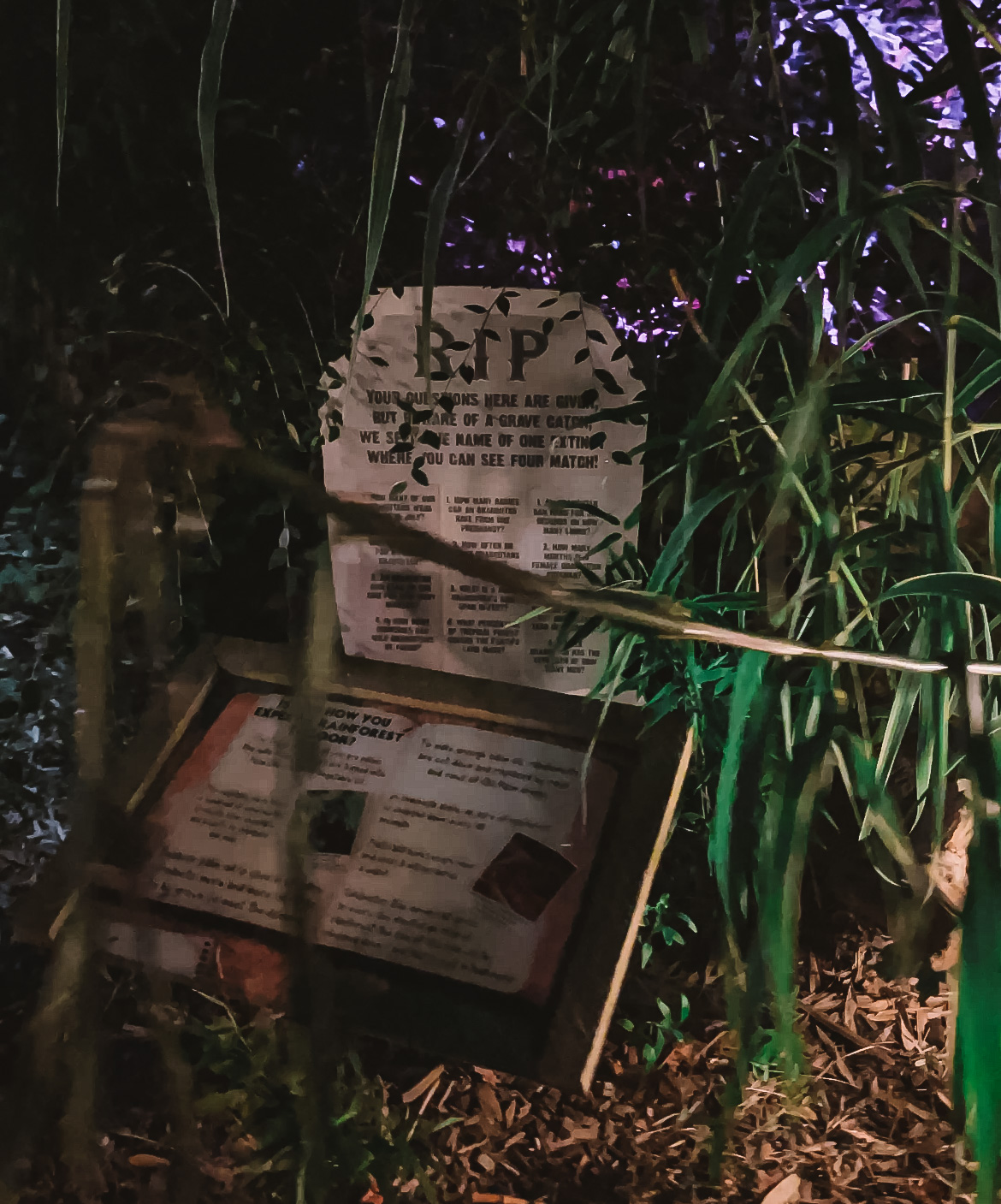 In 2019, we visited the Colchester Zoo Fright Night and had such a good time that we couldn’t wait to go back! Obviously, in 2020, it wasn’t possible, but, as soon as tickets were announced for the Colchester Zoo Trail of Terror, I immediately booked us in!

The Colchester Zoo Trail of Terror definitely isn’t for the faint of heart. With jump scares at every corner, creepy clowns and moments where you walk in complete and total darkness. But, if you love spooky season and don’t mind being chased by ghosts or men with chainsaws (not real ones) then you’d love the Trail of Terror

We arrived for our timeslot at 6:30 and were greeted by some scary nuns checking everyone’s tickets. Then we were taken through into the zoo and the trail begun with a haunted house! Although in the zoo, none of the animals was out for viewing and you had to follow a very specific trail that was clearly signed.

During the haunted house, furniture moves and walls shook and there were a bunch of creepy portraits. At the end of the hallway, we entered another corridor which plunged us into complete darkness. Like, the darkness where your eyes can’t even adjust. Thankfully, nothing jumped out of us but the anticipation was just as scary. I actually had to hold onto the back of Jaz’s jacket the whole time so I didn’t get lost haha.

We were then directed to a haunted graveyard where things rustled in the trees and ghosts rocked in the corner. Because it was so dark you couldn’t trust a single shadow without thinking it was something about jump out at you. And, sometimes, the shadows definitely moved where no one else did.

Skellingtons popped out of coffins and would walk toward you in silence, blocking your path.

Ghosts would scream and laugh unexpectedly, which, of course, made everyone else scream too haha.

Next step was a hay maze where we’d be chased by people revving chainsaws. I got very strong The Hills Have Eyes Vibes in this section and they definitely got me with some jump scares a few times.

Along the trail, a little way from the hay maze, creepy people would be sitting outside of caravans singing. They’d also shout in your face and, again, stop you from passing.

More ghosts lined the trail and people would jump out of the bushes to scare you. One scary creature ran after a man for so long it was like something straight out of a zombie apocalypse movie.

One of the last parts of the trail, and my favourite part, was the circus train. The train took you around parts of the zoo with a very funny host telling ghost stories of all the performers we saw. From fire breathers, dancers and acrobatics, it was a lot of fun. Of course, there were scary moments too. Such as a werewolf who had escaped its cage and ended up jumping out of the bushes and crashing into our carriage.

One of the scariest moments, that nearly had one girl behind us in tears, was the clowns. The train stopped and we were then surrounded by clowns in terrifying masks. They banged on the trains, leaned into people’s faces, laughed and screamed and just acted completely mental! It was a great finale and they really did look very scary.

At the end of the trail, we were treated to a band singing some Halloween/autumn classics like ‘Superstitious’ and ‘Ghost Busters’. Here we could also grab a drink and a little something to eat and calm our heart rates after all the jumps! The whole thing last around an hour and a half but I didn’t want it to end. I wanted to be scared even more haha.

It was such a fun experience and definitely something I would do again. If you’re in the area and you get a chance to go, don’t miss out! If you love Halloween and all things scary like I do, then you’ll love this fright night.