I love horror movies, I think I would go as far as saying they are my favourite genre of film. Something dark, creepy, haunting and psychologically disturbing  is exactly what I look for in a film. October and Halloween is of course the perfect time to watch them! So if you’re planning on spending this Sunday afternoon curled up on the sofa looking for something to watch then here is a list of my top ten horror movies.

From IMDB: A young family are visited by ghosts in their home. At first the ghosts appear friendly, moving objects around the house to the amusement of everyone, then they turn nasty and start to terrorise the family before they “kidnap” the youngest daughter.

Poltergeist was the first horror movie I ever watched and it’s still my favourite. I’ve watched this movie over and over and I never tire of it. It’s a classic, chilling ghost story with a creepy, but adorable little girl who you just want to give a big hug at the end.

From IMDB: A widowed mother, plagued by the violent death of her husband, battles with her son’s fear of a monster lurking in the house, but soon discovers a sinister presence all around her.

This is the most recent horror movie I watched and it freaked me out so much! I was home alone when I watched and didn’t know what to do or think afterwards. It’s a really good film with some great acting and had me watching through my fingers half the time.

From IMDB: A suburban American family is being stalked by a group of psychotic people who live in the desert, far away from civilisation.

This movie is a little more gory than the others on this list. It’s very disturbing and will have you on the edge of you seat. It doesn’t shy away from anything so you do see a lot of horrifying acts but it’s not cliched at all, there are twists and turns that you won’t be expecting. I highly recommend this movie, but maybe don’t watch it alone.

From IMDB: Paranormal investigators Ed and Lorraine Warren work to help a family terrorized by a dark presence in their farmhouse.

I love this movie! After I watched it for the first time I went online and researched the family that the film is based on. Tense, chilling and one that will no doubt become a classic this movie has resulted in me no longer being able to leave my foot out of the duvet at night. I don’t care how hot it gets, my feet will be safely tucked away and out of reach from any pesky demons!

From IMDB: A family looks to prevent evil spirits from trapping their comatose child in a realm called The Further.

This movie was certainly odd with a twist at the end that will have you screaming at your TV. It’s a genuinely scary film with two sequels that are just as creepy. If you’re new to the horror genre that this is a great franchise to begin with.

From IMDB: A journalist must investigate a mysterious videotape which seems to cause the death of anyone in a week of viewing it.

This is a classic movie. When I was younger I always refused to watch the entire videotape shown in the film for fear I would receive a phone call later.

From IMDB: A shy girl, outcasted by her peers and sheltered by her religious mother, unleashes telekinetic terror on her small town after being pushed too far at her senior prom

I love this movie and will always root for Carrie! Honestly this a bully victims dream, coming from someone who was badly bullied and would’ve loved to make the cruel kids ‘pay.’ The prom scene has to be one of the most memorable and famous scenes of the movie. It’s gory and disturbing but you’ll cheer Carrie on the whole way through, 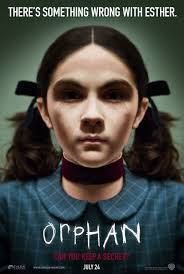 From IMDB: A husband and wife who recently lost their baby adopt a 9 year-old girl who is not nearly as innocent as she claims to be.

This film was SO CREEPY! I absolutely hated, and loved, Esther. What she did to the family was dark and twisted and I never would’ve guessed her secret. I feel like this is a pretty underrated film and deserves way more recognition. It’s clever and intense with an original story line and excellent acting, this is a movie you should definitely all see. 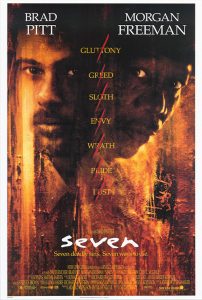 From IMDB: Two detectives, a rookie and a veteran, hunt a serial killer who uses the seven deadly sins as his motives.

Seven is a genius movie, I was gripped right from the start. I don’t think I’ve ever been as shocked at an ending than I was with this film. If you haven’t seen this film yet then what are you waiting for?! It’s an incredible dark and disturbing thriller with a twisted murder mystery.

10.) The Nightmare on Elm Street

From IMDB: The spectre of a dead child rapist haunts the children of the parents who murdered him, stalking and killing them in their dreams.

I am sure everyone has heard of this film and the infamous Freddy Krueger. It’s a classic horror movie and absolutely terrifying! I wouldn’t recommend watching this at night as you will never want to sleep again. It’s gory, tense and ruthless and one that you have to watch this Halloween!

I hope you enjoyed this post and it gave you some good movie ideas! Writing this has made me want to spend all day re-watching them, which I think I will do now haha. Let me know in the comments what your favourite horror movies are, I’d love some more recommendations. I’d love it if you subscribe to my blog, it would make my day. You can also follow me on Instagram and Twitter to keep up to date. Thanks for reading!