Books TikTok Made Me Buy 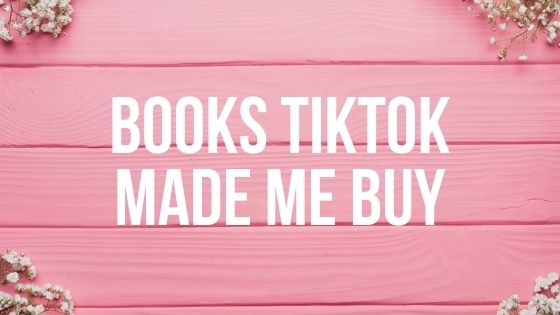 Books TikTok Made Me Buy

Lately, I seem to have stumbled onto BookTok which has been terrible for my productivity and my bank balance. But, with a number of great book recommendations flying about all over the place how can I complain?! Although I read mostly. on my Kindle these days, I wanted, no, needed these particular books in their physical form. Their covers were just too pretty and I so wanted to add them all to my actual bookshelf!

So, here are all of the books that TikTok made me buy.

A Court of Thornes and Roses got me out of my very long reading slump and I’m currently enjoying the Throne of Glass series too. So, how could I not pick up her next series, House of Earth and Blood? People have been raving about this adult fantasy book and it was actually a lot bigger than I released too at 912 pages! Focusing on half-Fae, half-human Bryce Quinlan, this book has been described as Game of Thrones meets Buffy the Vampire Slayer as Bryce aims to unravel the mystery of some brutal murders.

This book has been all over my TikTok feed and it definitely piqued my interest enough to buy the physical copy. In fact, I even included it, and most of the other books on this list, in my current TBR 2021 list. I mean, there’s no denying that the cover looks amazing. With action, adventure, romance, mystery, danger and angst what more could you want really?

3.) A Kingdom of Flesh and Fire – Jennifer L Armentrout

Yes, that’s right, I even pick up the sequel too. Even if I’m not a fan of the first book, which I think is unlikely, to be honest, I still wanted to have the full collection displayed on my shelves.

So, it shouldn’t come as a surprise either to learn that I got the third book in the trilogy either. Just look how pretty they all are together! I honestly can’t wait to get stuck into this new series. It’ll likely be my next one. Obviously, I haven’t read any descriptions or reviews on either of these two books in the series as I don’t want any spoilers. So I’m completely unaware of what they’re about.

This book has been making the rounds on TikTok as a highly emotional but beautiful story with a message of love and hope. I believe it’s a standalone novel which is different for me as I usually always prefer series. But, it’s talked about so highly and plot sounds really interesting so I had to pick it up. It focuses on Addie who traded her soul to the devil for immortality but for the price of always being forgotten by everyone. Until one day, in a bookshop, she meets someone who remembers her. Doesn’t it just sound so good?!

I’m sure you’ve all heard about this series by now as it’s been made into a Netflix show which sounds like it’s super popular. Of course, this means that annoyingly it was impossible to find the book without the ‘now a Netflix series’ sticker. Why…why do they do that?! I bought the boxset trilogy which I thought looked super pretty in its casing. I really want to read the books before watching the TV show so it’s going to be a while before I can understand the hype.

There’s not a BookTok recommendation video that goes by where this series isn’t included. The cover for this drew me in instantly, I mean, just look at it! It’s dark and enticing and so pretty. And, when I learned it was a modern retelling of Hades and Persephone there was no way I could just leave it. It’s actually a lot shorter than I released at only 279 pages long, but I’m really hoping it’s as good as everyone says!

Of course, I had to pick up the sequel too. I’ve also learned that there’s another one told from Hades perspective and a third book on the way soon too. But, I thought it’s probably best to read these two first before picking up Hades version of the story.

So those are all the books TikTok made me buy…although I’m sure there’ll be many more in the future too. I just hope I can find the time to read them all haha.

Let me know in the comments if you own or have read any of these books and what your thoughts are on them! I’d love to know.