My Fiance Describes my Favourite Books 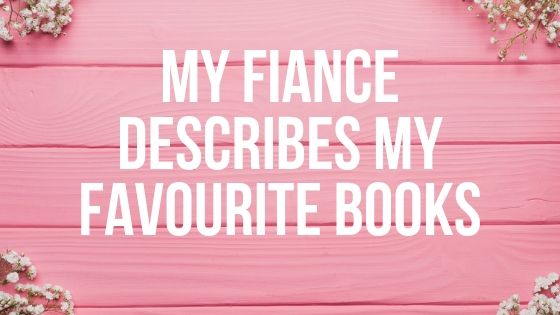 I recently saw this post on Pretty Purple Polka Dots blog and loved it! It was so entertaining to read and interesting to see someone actually judge a book by it’s cover. Immediately after reading her post I bombarded my fiance with pictures of my favourite books and told him to describe what he thought they were about purely by the title and the cover design.

My fiance is not a reader. At all. I believe the only books he’s ever read are the Harry Potter ones. So this was definitely going to be a challenge for him. I decided to give him a mix of my favourite books and books that I had read recently to describe.

A Tale for the Time Being

I’m guessing it’s about a child who gets separated from her parents in some way. I assume it’s based in Japan, the fact that the flag is there suggests to me something about Japenese history, maybe the atomic bombings.

Ruth discovers a Hello Kitty lunchbox washed up on the shore of her beach home. Within it lies a diary that expresses the hopes and dreams of a young girl. She suspects it might have arrived on a drift of debris from the 2011 tsunami. With every turn of the page, she is sucked deeper into an enchanting mystery.

In a small cafe in Tokyo, sixteen-year-old Nao Yasutani is navigating the challenges thrown up by modern life. In the face of cyberbullying, the mysteries of a 104-year-old Buddhist nun and great-grandmother, and the joy and heartbreak of family, Nao is trying to find her own place – and voice – through a diary she hopes will find a reader and friend who finally understands her.

We Are All Completely Beside Ourselves

Hilarious and heartbreaking? So it’s a funny but deep story. I’m guessing it’s a bit like The Fault in our Stars where it seems like it could be happy but then goes in the opposite direction. As I can see a mum and her kids on the cover it makes me think either the mother dies or a child dies.

Rosemary’s young, just at college, and she’s decided not to tell anyone a thing about her family.

Rosemary is now an only child, but she used to have a sister the same age as her, and an older brother. Both are now gone – vanished from her life. There’s something unique about Rosemary’s sister, Fern. And it was this decision, made by her parents, to give Rosemary a sister like no other, that began all of Rosemary’s trouble. So now she’s telling her story: full of hilarious asides and brilliantly spiky lines, it’s a looping narrative that begins towards the end, and then goes back to the beginning. Twice.

From the title, I’m guessing this girl isn’t completely fine. She either hides how she feels or has a lot of pent up anger or is very self-conscious. The burnt match house makes me think she has a lot of issues at home and maybe self-harms or something.

Eleanor Oliphant leads a simple life. She wears the same clothes to work every day, eats the same meal deal for lunch every day and buys the same two bottles of vodka to drink every weekend.

Eleanor Oliphant is happy. Nothing is missing from her carefully timetabled life. Except, sometimes, everything.

One simple act of kindness is about to shatter the walls Eleanor has built around herself. Now she must learn how to navigate the world that everyone else seems to take for granted – while searching for the courage to face the dark corners she’s avoided all her life.

A Court of Thorns and Roses

That looks like some kind of vampire book, I know you love those haha. I’m going to say a teenage vampire falls in love and others don’t approve. It’s a thorny, painful love that she shouldn’t go for but she can’t help herself.

Feyre’s survival rests upon her ability to hunt and kill – the forest where she lives is a cold, bleak place in the long winter months. So when she spots a deer in the forest being pursued by a wolf, she cannot resist fighting it for the flesh. But to do so, she must kill the predator and killing something so precious comes at a price.

Dragged to a magical kingdom for the murder of a faerie, Feyre discovers that her captor, his face obscured by a jewelled mask, is hiding far more than his piercing green eyes would suggest. Feyre’s presence at the court is closely guarded, and as she begins to learn why her feelings for him turn from hostility to passion and the faerie lands become an even more dangerous place. Feyre must fight to break an ancient curse, or she will lose him forever.

Right, this is definitely about some kind of vampire school and I know it’s your favourite one. She doesn’t look like a vampire so I’m going to guess it’s about someone who wants to be a vampire and they have to do a course at this school to become one.

Lissa Dragomir is a Moroi princess: a mortal vampire with a rare gift for harnessing the earth’s magic. She must be protected at all times from Strigoi; the fiercest vampires–the ones who never die. The powerful blend of human and vampire blood that flows through Rose Hathaway, Lissa’s best friend, makes her a Dhampir. Rose is dedicated to a dangerous life of protecting Lissa from Strigoi, who are hell-bent on making Lissa one of them.

After two years of freedom, Rose and Lissa are caught and dragged back to St. Vladimir’s Academy, where vampire royalty and their guardians-to-be prepare for a life fraught with danger. Rose and Lissa must navigate their treacherous world and never once let their guard down, lest the evil undead make Lissa one of them forever. But soon Rose finds herself gripped by temptation of forbidden love, leaving Lissa exposed to Strigoi attack. Now she must choose between the best friend she lives for and the man she can’t live without

Overall I don’t think he did too badly describing my favourite books! I knew he’d never be able to guess what We Are All Completly Beside Ourselves would be about because it has way too many twists to count. His answers to both A Court of Thorns and Roses and Vampire Academy made me laugh. Imagine being able to just go to school and do a couple of courses to be a vampire! Where can I sign up?!

I hope you all enjoyed my fiance describing some of my favourite books. How well do you think your partner or friend would do? Don’t forget to subscribe to my blog while you’re here. You can also follow me on Instagram, Twitter and Pinterest too. Thanks for reading!