To Kill a Kingdom by Alexandra Christo Book Review 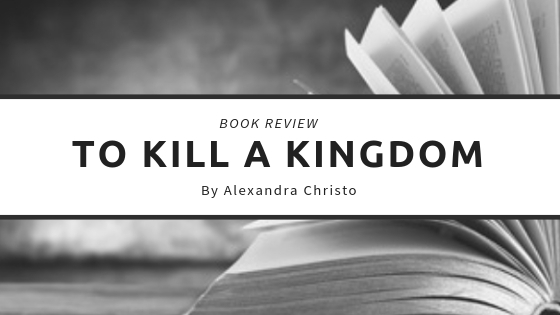 Title: To Kill a Kingdom

Summary of To Kill a Kingdom

Princess Lira is siren royalty and the most lethal of them all.

With the hearts of seventeen princes in her collection, she is revered across the sea. Until a twist of fate forces her to kill one of her own. To punish her daughter, the Sea Queen transforms Lira into the one thing they loathe most – a human. Robbed of her song, Lira has until the winter solstice to deliver Prince Elian’s heart to the Sea Queen or remain a human forever.

The ocean is the only place Prince Elian calls home, even though he is heir to the most powerful kingdom in the world. Hunting sirens is more than an unsavoury hobby – it’s his calling. When he rescues a drowning woman in the ocean, she’s more than what she appears. She promises to help him find the key to destroying all of sirenkind for good.

But can he trust her? And just how many deals will Elian have to barter to eliminate mankind’s greatest enemy?

Review of To Kill a Kingdom

If you’re a fan of The Little Mermaid and dark tales then this could be a book for you. To Kill a Kingdom focuses on both Lira, a siren princess who each year on her birthday has to kill and steal a human heart, and Elian, a prince of a golden island who longs to be a pirate ridding the seas of sirens instead.

Lira has made it her goal to only ever steal the hearts of princes. However, after she breaks a rule and gives her mother, the sea queen, quite a bit of sass she gets punished. Her punishment includes losing her siren song, gaining legs and ending up on the boat of prince pirate Elian, whom she must kill and retrieve his heart in order to become a siren again.

Honestly, I loved Lira, she was fierce, ruthless and always had a witty comeback. I thought Lira and Elian’s relationship was great, it developed well and got them to a place where they both respected each other and had a fairly solid friendship before delving into any romantic possibilities. It was a slow burner but I thought they worked well together and their dry, biting humour was entertaining. I really liked the other characters too, they were funny and loyal with great friendships and all the women in the story were just such strong, amazing characters. No damsels in distress here!

I found it was quite slow to start with as Alexandra Christo built the world and it took me a little while to get into it but it definitely picked up speed and there was plenty of action. The overall story was really interesting, I’m always a fan of a dark re-telling of a classic fairytale. It was also really well-written. Alexandra Christo did an amazing job developing the world, the characters and the plot, her descriptions were so vivid and imaginative.

The only thing that I was slightly disappointed with was the ending. There was a big reveal that felt a little anti-climatic. Plus the way it ended felt rushed. I would’ve liked maybe something a little more complicated rather than ‘they lived happily ever after.’ There was definitely room for a sequel to explore not only the massive world she’s created but the characters new lives and relationships. However, I don’t believe a sequel has been planned.

Other than the ending this was a really enjoyable read.

I hope you all enjoyed this post! If you’ve read To Kill a Kingdom let me know in the comments what your thoughts were.