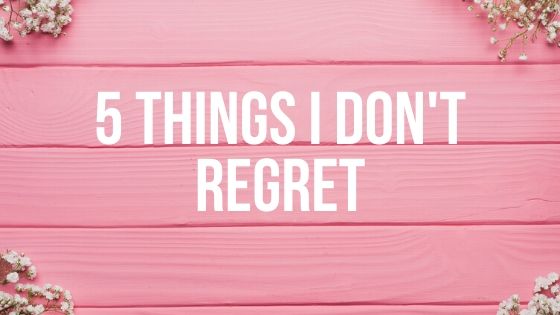 Regret is a funny feeling. I could list off a whole bunch of things I wish I could go back and change but what would be the point? Spending my time regretting something I said or did or didn’t do only results in me feeling sad about the situation. So, here are 5 things I don’t regret even though some may think I should.

While my degree may not have opened too many doors for me in my life so far, it did teach me so much more than just the subjects I was studying. With most people nowadays opting for apprenticeships which are fantastic schemes to get you both working and earning qualifications, university almost seems redundant. However, moving out and away from home did me a world of good and forced me to be much more independent.

I learned how to cook, how to pay rent and bills, how to manage and prioritise both my time and money and just survive out on my own. I also got to drink alcohol and eat ice cream for breakfast as there were no sensible adults around to tell me not to haha.

I had studied and been involved in performing arts since I was about 2 years old. So, when it came to choosing what to study at both college and uni there was no question about it. At college, I did a BTEC Performing Arts course which tends to be looked down on because it’s not A-Levels. At the time, when people were insinuating that I was stupid because I was doing a BTEC, I did regret it. I wished I done Drama and English A-Levels instead.

Now, when I look back on my college experience I’m reminded of what an incredible time it was. I had some great friends, tons of fun, learned a lot and wasn’t just sat in a classroom. We were out dancing, singing, acting, putting on shows and learning the ins and outs of being behind the scenes. I loved every second of it. College was easily one of the best times of my life.

Cutting people out of your life can be really hard initially. In my experience though once it’s done nothing bad has ever come from it. My life either carried on, unchanging, or it improved. I just felt better about myself like a weight had been lifted.

All throughout primary and secondary school I was bullied and ended up attaching myself to a group of girls who bullied me just so I wouldn’t have to spend time alone. I was very much a Jenny Humphrey when I wanted to be a Blair Waldorf. It wasn’t until my last year of school where I thought, ‘Nah fu*ck this’ and ditched that group. I spent that last year completely alone. The very thing I feared but I was so much happier overall.

Learning to drive was hard. It was a long process and I pretty much hated every moment of it. I passed my driving test after the second time and got insured on my mum’s car. I drove around for maybe 5/6 months and still hated it. After a couple of near accidents and pretty much destroying my mum’s car I was done haha. I haven’t driven for about two years but I don’t regret learning how to drive at all. It’s a skill that, one day, will be very useful once I’ve built up the confidence for it and I feel like it’s harder finding the time and motivation to learn to drive the older you get.

With how much energy, time, money and effort I’ve put into this blog, getting nothing or little back in return, some people may think I regret it or even wonder why I keep it going. But I love blogging. I love the people I’ve met and the connections I’ve made. It’s such a great outlet for me. Blogging about the things that I love and make me happy and finding people who love the same things I do is a great feeling! My blog is one of the most important things in my life. Not only has it connected me with people from all around the world it’s actually helped me get jobs and into the world of digital marketing. Beauty and the Bookshelves is definitely not something I would ever regret!

Those are the 5 biggest things I don’t regret! What are some things you don’t regret, even if others think you should?