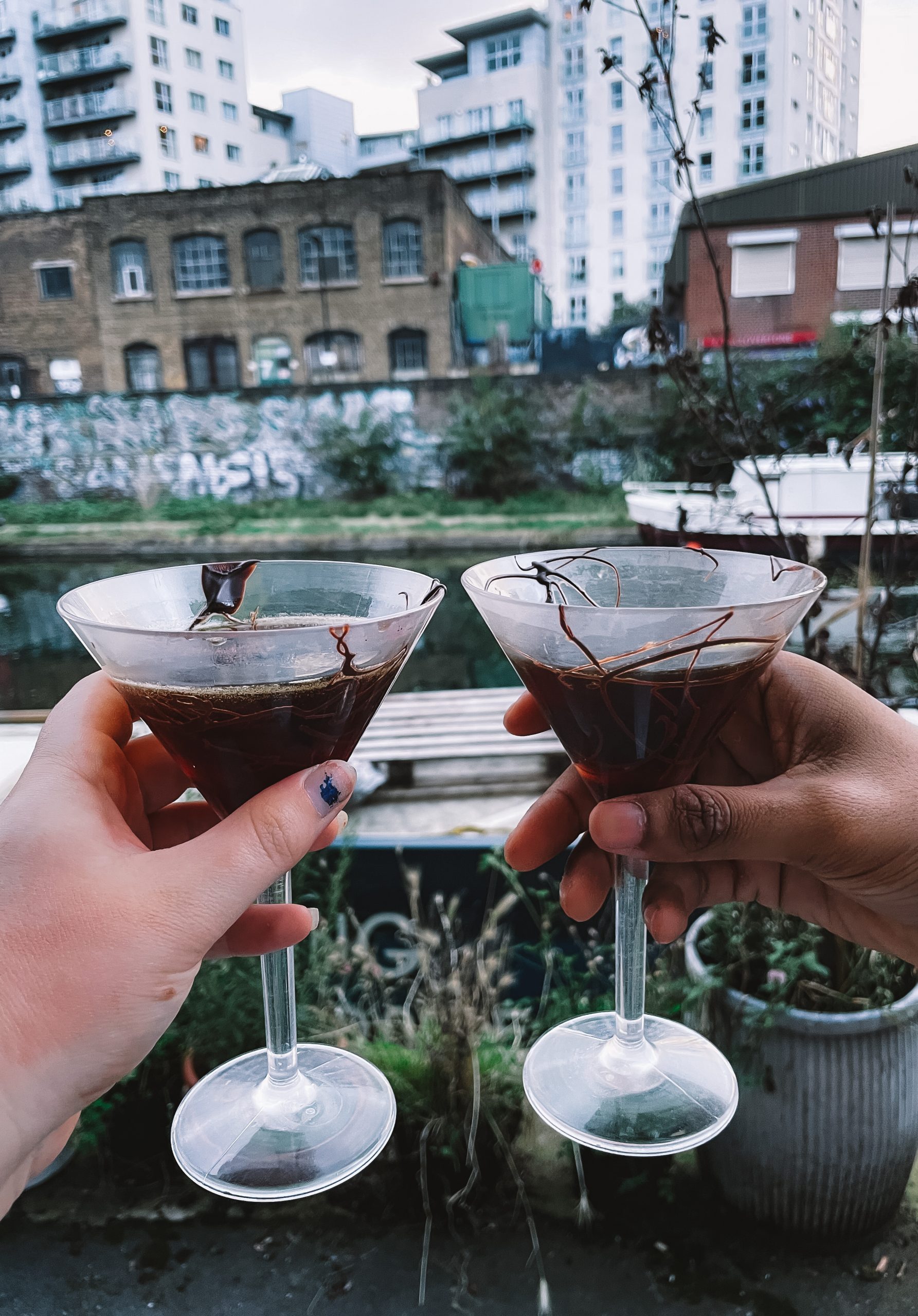 For our wedding, we received an experience day voucher for a chocolate and cocktail masterclass in London! As my parents used to make chocolate from home for a living, I really thought I’d smash this class…but oh was I wrong! The class lasted for 2 and half hours and walked us through how to make two classic cocktails with a chocolate twist as well as some truffles too which we could then package up and take home (or eat there and then).

Keep reading to learn more about the chocolate and cocktail masterclass experience and see just how *well* our creations came out!

Chocolate and Cocktail Masterclass at MyChocolate

The masterclass was held at MyChocolate in London which overlooked the Regent’s Canal. This wasn’t a part of London I’d ever been before. So, although we actually arrived an hour early it was fun to drive around and explore. We were also able to park right outside the workshop after 6:30 which was a nice added bonus – especially as I was wearing heels and didn’t fancy walking far haha.

At 6:30 the doors opened and we were greeted by a super friendly chocolatier who would be our host/teacher for the night. There were 12 people taking part in the class with us, which meant it was 6 to a table, and after nearly 2 years of not interacting with any strangers at all it definitely felt weird haha. But it was also refreshing talking to someone brand new.

As we entered we all had to wash our hands and then were led down some steps into the chocolate workshop. As soon as the door opened though, we were hit with a strong smell of chocolate which was amazing and very much reminded me of my childhood with my parents making chocolate in their makeshift factory in our garage.

When everyone was seated it was time to get started! We started with the cocktails and were told that we’d be making both a Mojito and an Espresso Martini – two cocktails I’ve never actually tried before. The Chocolate Mojito was actually really simple to make as it was one that you simply build in the glass. Adding mint leaves, ice, fresh lime juice, white rum, melted chocolate, instead of sugar syrup for some sweetness, and soda water. We then mixed all the ingredients together and voila! Admittedly, mine didn’t look too appetising haha. But, it was pretty refreshing and a good way to start the class.

We then went straight into making the Chocolate Espresso Martini which was a little more work. Firstly, we were shown how to decorate the inside of the glass with chocolate. The chocolatier made it look so easy. Just dip a knife into some chocolate, spin the martini glass around in your hand and create pretty patterns. But, of course, for someone who had never done it before, it just turned into a mess haha.

The Chocolate Espresso Martini consisted of vodka, espresso and chocolate liqueur. This is then all shaken up and poured into the Martini glass. We had one man on the table in charge of the measuring, Jaz was the shaker and I was the person to try and pour everyone’s drink evenly.

I think it turned out pretty well, despite the fact I hate the taste of coffee. I’m not sure exactly why, but it tasted like Christmas in a glass. So I added it to my list of cocktails to serve people over Christmas if we can actually host family round this year! After we’d finished making both cocktails we had a little break. We popped outside and looked over the canal while drinking the cocktails.

When we came back in the tables had been cleared and set up ready to make some chocolate truffles! First, we had to make some ganache which would be the filling of the truffles. To do this, we simply scooped 8 teaspoons of dark chocolate in a bowl and then added 4 teaspoons of full fat cream and mixed them together until the mix became stiff. Then, we added the ganache into a piping bag and piped bitesize pieces out onto the parchment paper-covered table. This was actually a lot tricker than I thought as the mixture was so thick! And ours definitely did not look good at all. I was really starting to lose hope that we’d have anything remotely edible at this point.

While the ganache was setting our chocolatier host went through all the different ways we could decorate it. There was a tray in the middle of the table with a bunch of toppings such as salt, ginger and cinnamon, white chocolate pieces, coconut and more. We were also given more bowls of chocolate which we could drizzle over the truffles and chocolate powder to roll them in.

Bars of fudge were laid out on the table too which we could either eat there and then or decorate. Jaz decided he was too hungry to wait so he ate his bar haha. But I wanted to use the cutters and make little heart-shaped pieces of fudge and decorate them.

Decorating the truffles was probably my favourite part of the whole class. While I wasn’t the most creative with my decorations, it was fun coating the pieces of ganache in chocolate powder, throwing them in the bowls of melted chocolate and rolling them around and then drizzling dark chocolate over the top of them. My truffles were specifically designed for those with a strong sweet tooth haha. I added a couple of white chocolate flakes to try and make them look somewhat artistic. And I made one with ginger and cinnamon sprinkles. But, mainly I just drizzled chocolate over them.

Once we’d finished decorating it was time to package them up. Because the chocolate hadn’t quite set yet, we were given a box to put them in and hope they wouldn’t get too jostled around on the way home. I thought our truffles looked much better when they were all neatly in their clean box. But, I don’t think we’ll be opening a chocolate shop and making our millions anytime soon haha.

Overall, this was a really fun experience! It felt great to get out and do something completely different on a Friday night. If you’re a big chocolate lover I’d definitely recommend it!

I hope you all enjoyed this chocolate and cocktail masterclass experience post! Let me know in the comments if you’ve done something similar or if it’s something you’d like to try. And, while you’re here, don’t forget. to subscribe to Beauty and the Bookshelves. You can also follow me on Instagram and Twitter too. Thanks for reading!