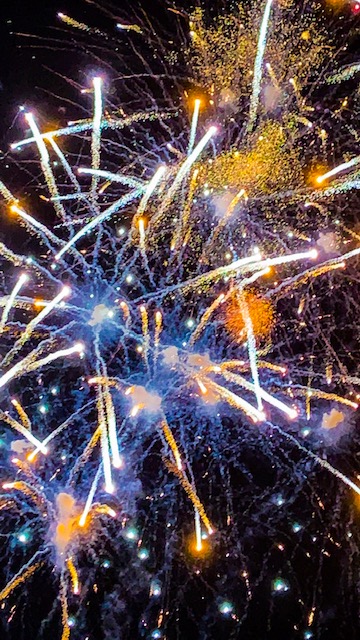 The Story Behind Firework Night

For those of you who aren’t from the UK, Bonfire/Firework Night is a celebration of the anniversary where Guy Fawkes attempted to blow up parliament, along with King James I, with the Gunpowder Plot in 1605. Guy and a group of others planted 36 barrels of gunpowder under the houses of parliament. Before the managed to set off the explosion they were caught by some guards. In the following January Guy was found guilty of his crimes and was hung, drawn and quartered.

Since then people in the UK have Bonfire Night to remember the historical event. A dummy of Guy Fawkes will sit on top of the bonfire that we all gather round to watch burn before an array of beautiful fireworks are set off. It sounds like a pretty brutal thing to celebrate but these days it’s more about having a fun night out with friends and family.

We arrived at the showground in our welly boots, thick coats and scarves along with hundreds of other people. Plenty of food stalls, fairground rides for both adults and children and a beer/cider tent were scattered around the area. With the bright lights, loud music and the smell of hot doughnuts in the air it all felt very festive.

Disappointingly we found out that the traditional bonfire was not going ahead. We believe it was due to the heavy wind and rain the night before. So, instead of warming ourselves by the bonfire a friend suggested going on the bumper cars.

I’m not usually a big fan of fairground rides, to be honest. They’re just not my kind of thing. I hadn’t been on bumper cars since I was a child. I was pretty apprehensive beforehand but once we sat in the car and started zooming around the area and crashing into everyone it was actually a lot of fun.

After the bumper cars, we then found a perfect spot to gather and watch the firework display.

The display was pretty spectacular. The fireworks were extremely pretty, making the audience go ‘oooh’ and ‘ahh’ throughout the entire thing. The only downside was that there wasn’t any music playing to set the tone. Last year the Sherborne Castle Fireworks played songs from The Greatest Showman alongside the display which almost brought me to tears!

Music would’ve made a great addition to this display but the fireworks were still just as beautiful!

Here are some of my favourite pictures I took of the fireworks: