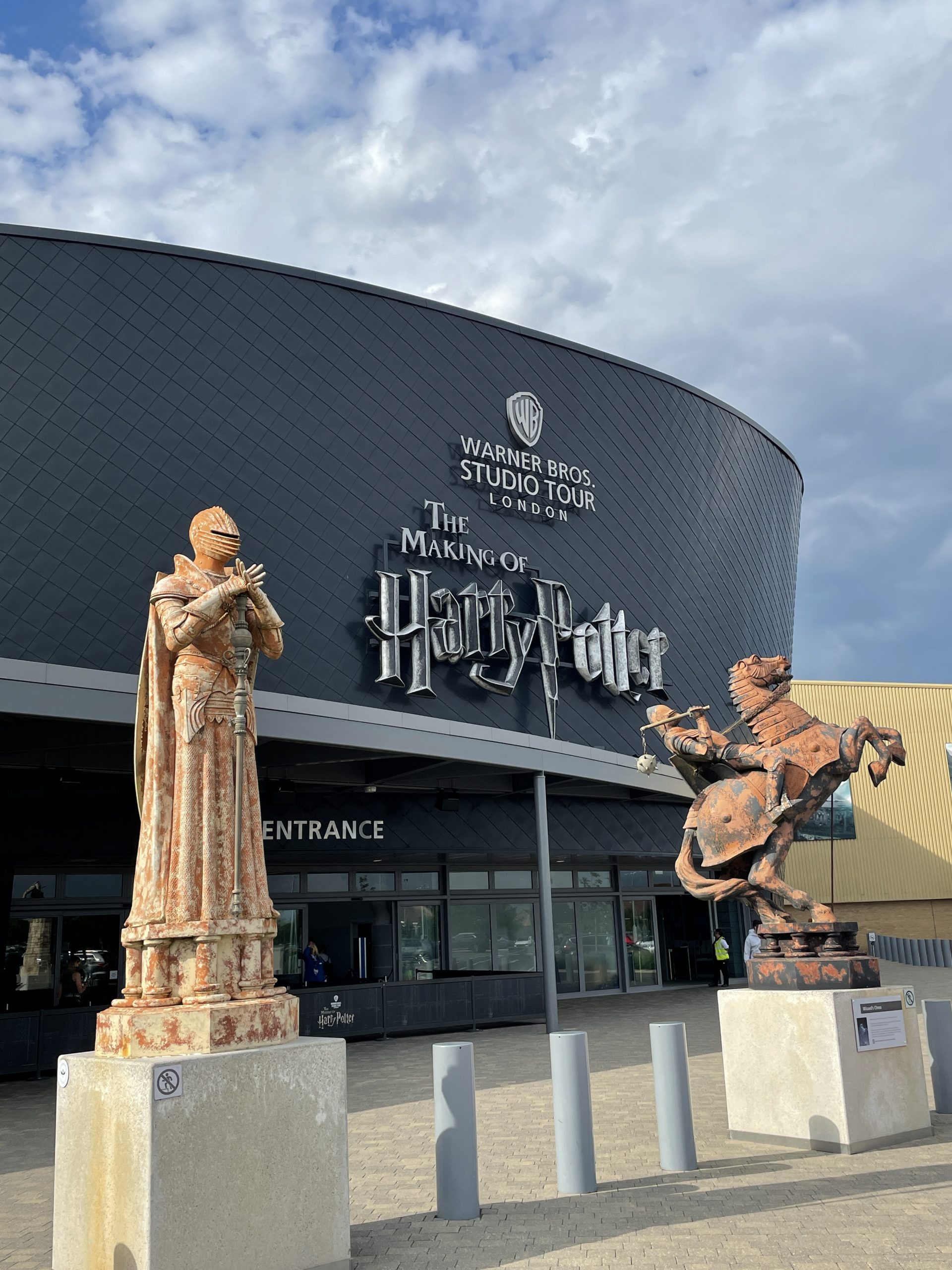 It’s no secret that I’m a HUGE Harry Potter fan – borderline obsessed. And, although we only went to the in October, we decided to head over to the Warner Brothers Studios in Watford last week to have a Harry Potter filled evening! For me, it’s one of those places I will never tire of. No matter how many times I go I will still be fascinated with everything on diaplay. From the costumes and the sets to the props and the art. It’s all such an amazing experience and something every Harry Potter fan should go to!

In this blog, I’ll be sharing some of my favourite pictures from the Harry Potter Studio Tours 2021 and a little gift shop haul too!

The first stop on the tour is, of course, the Great Hall! As it was the Celebration of Slytherin theme, the room was decorated with Slytherin banners. We saw the long tables and the iconic costumes of Draco Malfoy, Dumbledore, Professor McGonagall, Snape, Hagrid and more.

After the Great Hall, we then entered a large room that held many props, costumes and Harry Potter Movie sets to walk around. It’s amazing being able to see all of these places in real life. The Slytherin Common Room, the Potions Classroom and Dumbledore’s Office are just some of my personal favourites.

We learned that the reason why they decided to have a Celebration of Slytherin theme was because they found an old, rolled-up rug in the corner somewhere that actually belonged in the Slytherin common room. This simple discovery sparked the idea to celebrate all things Slytherin!

You could spend ages looking inside Hagrid’s Hut and taking in every little detail. From the replica of Fang and Hagrid’s huge costume to all the clutter, there’s so much to find!

We also saw the Meeting at Malfoy Manor table where Nagini is slithering along ready to eat Charity Burbage while all the Death Eaters sit and watch.

The Malfoys are one of my favourite wizarding families so I always look forward to seeing their costumes. I particularly love the costumes below of Lucius, Narcissa and Draco during the Deathly Hallows. Although this time round was a bittersweet moment as they had included a plaque in memory of Helen McCrory.

As much as we all hate Umbridge, you can’t deny her outrageously pink office and costumes were iconic. I really love this part of the tour and always have to mention how much I want those decorative cat plates haha. You may notice that one of the costumes also includes Salazar Slytherin’s Locket – one of the Horcruxes.

One of the most magical parts of the tour is seeing Platform 9 and 3/4s and the Hogwarts Express! I would give anything to be able to ride that train straight to Hogwarts haha.

While you still can’t wander through the train because of the COVID restrictions, you can see Harry and Ron’s carriage from their first train ride covered in magical snacks.

There were also some Gilderoy Lockhart Books on display that I would absolutely love to own but sadly Gilderoy merch is seriously lacking!

Privet Drive and the Knight Bus

At the halfway point of the tour, you can venture outside to see the Knight bus, go inside the Dursley’s house, sit on Hagrid’s motorbike or inside the Weasley’s car. I really love the room in the Dursley house that’s filled with Harry’s Hogwarts letters!

My absolute favourite part of the tour is Gringotts Bank. It’s a stunning set with massive chandeliers, huge columns, goblins and an animated dragon that destroys a vault. Every time I see this section I’m always amazed! I would also love to get the Gringotts Bank floor tiles for my kitchen haha.

I never want to leave the Diagon Alley section as it can really feel like you’re there! As you wander down the cobbled street and look in shop windows at wands, brooms and books it makes you wish you could go inside and stock up on essential school supplies!

The grand finale of the tour is seeing the beautiful Hogwarts castle in all its glory! You can walk around the entire thing, looking at every single little detail. This castle takes up the whole room and it’s such an incredible thing to see! It was used for some of the flying and swooping shots that you see in the movie which I think is very cool. While it is absolutely amazing, this part of the tour always makes me a little sad as I know it’s the end haha.

It’s honestly impossible to not spend a small fortune in the Harry Potter Studio gift shop. Whenever I go I always have to buy a wand to add to the collection, plus a chocolate frog. This time, I got the Slytherin Mascot wand which is a very cool looking wand that features a snake winding around it. I was originally looking for Narcissa’s wand but unfortunately, they were all sold out.

I also bought the Hogwarts Spirit Jersey which has the Hogwarts logo on the front and the word ‘Hogwarts’ on the back in huge gold lettering. It’s great to wear around the house on lazy days as it’s so big and comfy and cosy. I was very tempted to get more Slytherin clothing but as I already have two jumpers and a hoodie I thought I’d go for something different this time. Lastly, I ended up getting two chocolate frogs just because I’m obsessed and they’re so good!

I hope you all enjoyed this post of the Harry Potter Studio Tours 202! I am actually hoping to go again later this year for the Hogwarts in the Snow theme. Let me know in the comments if you’ve been to the Studio Tours or if you’re planning on it soon.