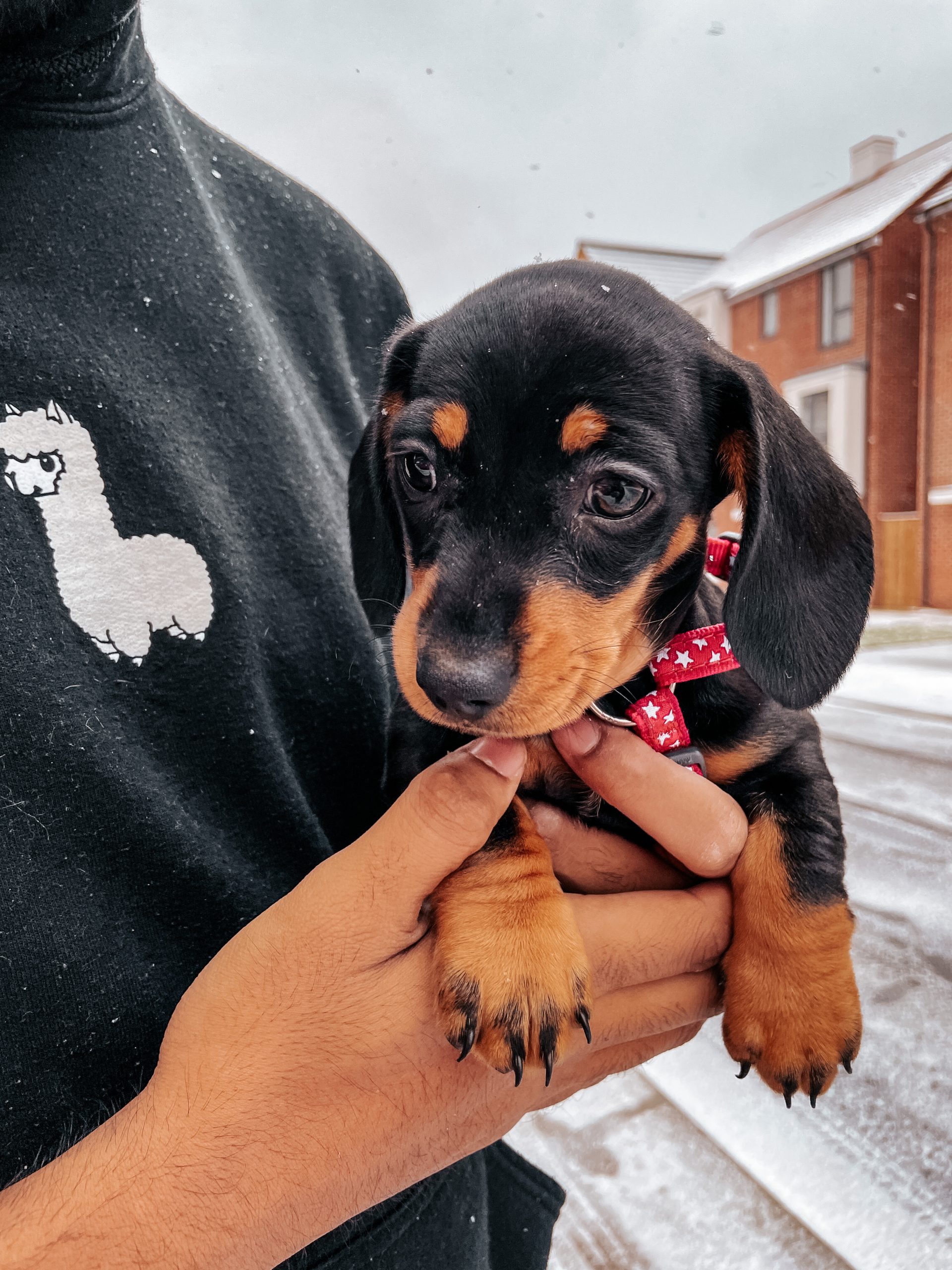 So, if you follow me over on Instagram you’ll know that we recently got a new puppy! It was something my husband had been wanting for a really long time. And, with nothing else going on due to the pandemic, we sped the process up a bit. As I’m not really a dog person and have never owned a dog in my life, it took quite a bit of convincing. The one thing I insisted on was that it had to be a small dog. I find big dogs pretty scary and I also didn’t want the kittens feeling scared or intimidated in their home. We started looking at smaller dog breeds but none were really standing out to me. Then, we came across miniature dachshunds.

Cute, tiny and with big personalities, mini dachshunds seemed ideal so we dived in and started researching them right away!

All about Miniature Dachshunds

One of the most important things for us was whether this type of breed would get on well with kittens. As we already have 3 of them, they were my priority. We spoke to quite a few people who have or have had a dachshund and everyone said that they’d never had any problems with dachshunds and cats getting along which was great news! Of course, it also depends on the personality of the dog. But, we were getting her very young and we learned that the breeder lived on a farm with around 15 other cats too, so she had always been around them.

Everyone we spoke to loved dachshunds. Both sets of my grandparents have owned them in the past and said they would never own any other dog breed as they loved dachshunds so much. Lovely, affectionate toward their owner, playful and funny were all words people used to describe them. We did a lot of Googling around them too and found out that they can also be pretty stubborn, especially when it comes to training and quite independent too. Some people online said that Dachshunds could be quite aggressive to people or other dogs they don’t know. Dachshunds are also known to be pretty vocal, but after living my entire life with some very vocal cats, this didn’t really bother us.

In the end, the pros definitely outweigh the cons and we were all set on getting a miniature dachshund. We had a few phone calls and video calls with the breeder, for obvious reasons we couldn’t visit first, to learn all about our chosen puppy, ask any questions, see the mum and dad together and if they were well treated. This was a big concern as we had heard so many horror stories of bad breeders who kept the dogs in very poor living conditions. But, this breeder was the complete opposite.

The mum and dad lived together and this was her very first litter. As they owned and lived on a farm we knew they were animal lovers. And, from the video calls, it was clear all the animals were cared for properly. They were giving most of the puppies away to family and friends and happily answered all of our questions so it was all a very positive experience.

We reserved the puppy and started coming up with name ideas! We wanted something cute and that wouldn’t sound too silly when shouting in the park haha. First of all, we ran through a bunch of Disney names to keep in theme with the kitten names, Thora, Loki and Meeko, but none of them felt right. As big fans of Harry Potter we went through all the female names in that series too and Luna was one that really stood out. It’s such a pretty name and one that we both agreed we loved.

Originally we were supposed to bring Luna home on Saturday the 30th of January. But, we learned that on Friday the 29th neither of us had any work calls in the afternoon. So, instead, we impulsively decided to travel down to North Somerset to pick her up a day early. I worked from my laptop in the car the whole afternoon which was an odd experience haha but was worth it to get Luna early and spend the whole weekend with her!

We were a little worried about Luna being in the car for a few hours. So, we made sure to bring a pet bed that had the kittens scent on it, along with a few toys and some treats too. Lucky for us, she was a perfect little angel! She barely cried and pretty much slept the entire time. By the time we got back home, it was 8/9pm and she was in a very playful mood. She explored around our kitchen, played with a few new toys and then settled back in our laps to sleep.

We were planning on introducing her to the cats slowly. But, she had such a chilled out temperament that we thought we’d just see what happens. So, we let the kittens in and introduced them all on that first night. The kittens were very curious and cautious and sniffed Luna at lot. But, they seemed accepting and Luna was very unbothered by them which was a great sign. There was no aggression from anyone and we were relieved!

That night, Luna slept in the bedroom with us and again, she was so much better than we thought she would be. She slept peacefully until about 3am where she was suddenly wide awake and wanting to play. The next night, we’d arranged a crate downstairs in the kitchen for her which had her bed, blanket and toys. While she did cry for a few hours, she eventually settled down and went to sleep. The third night she barely cried at all! And now we’re able to leave her to sleep downstairs all night, making life much easier for everyone.

We’ve now had Luna for almost a month which seems crazy to me! Her personality is really starting to come through and we’re both learning more about her every day. She absolutely LOVES the cats and plays with them pretty much all day out in the garden. Thora and Loki are very accepting of her and will happily play and tolerate her when she’s jumping all over them haha. Meeko is still very nervous around her and needs quite a bit more time. Luckily, Meeko has plenty of safe spaces to escape whenever she needs. She knows that Luna can’t climb up the stairs by herself or jump up on chairs. Luna has also picked up on Meeko’s nervousness, so she knows she can’t play with her or be as energetic around her as she is around Thora and Loki.

She is definitely a stubborn dog and is getting more and more vocal which we’re trying to control. If she’s in her bed and dropped a toy, she’ll bark until one of us picks it up instead of leaving the bed to get it herself haha. She’ll bark when she wants a cuddle or food or when she’s tired or bored, so she can be pretty loud. She’s also learning to jump higher which I think the cats have taught her haha.

Recently she went on her first walk and got a LOT of attention from humans and other dogs. Thankfully, she wasn’t aggressive toward anyone at all, like many said mini dachshunds were. She was very friendly, licked many faces and ate up all the attention she was getting! Because she’s so tiny she gets tired pretty quickly so the walks are quite short and she’ll whine toward the end as she just wants to be carried.

Overall though, she’s such a good little puppy. She’s very playful and energetic, very loving and hardly any trouble. She can definitely be annoying at times haha, especially when we’re trying to work and all she wants to do is play. But, she is absolutely adorable and has mastered the puppy dog eyes already! I think she’s quite a quick learner and we’re all very excited to learn more about her as time goes on and for our friends and family to finally spend time with her too.

I hope you all enjoyed this post and the spam of new puppy pictures! If you did, ten don’t forget to subscribe to Beauty and the Bookshelves.