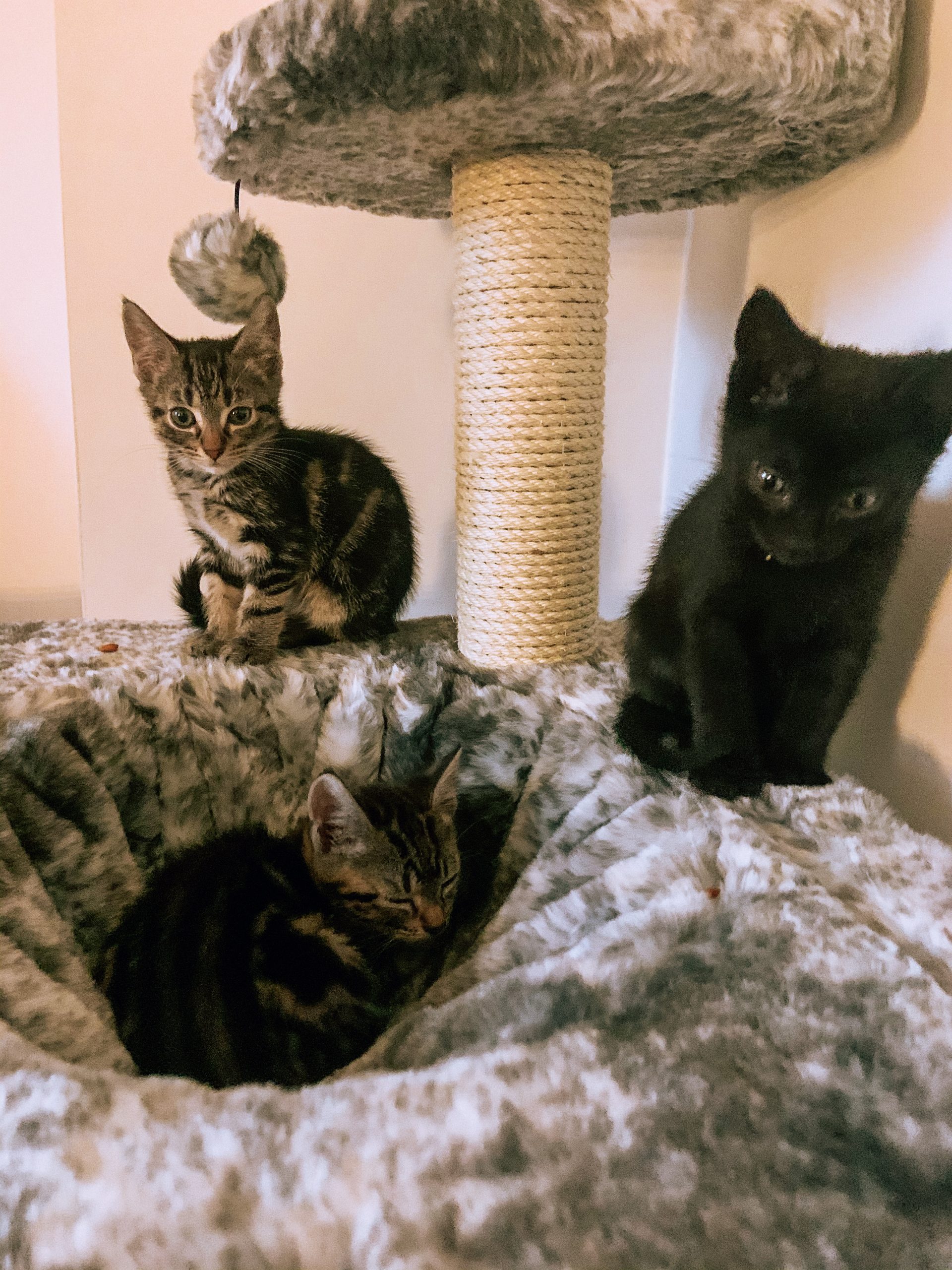 It’s okay, 2020 has been saved! 🙌 On Sunday the 18th of October Jaz and I brought home 3 adorable little kittens and honestly, they’ve been one of the best things to happen to us this year.

We had always planned on getting kittens. After growing up with cats my entire life there was no question about it. Originally, we were going to get 2 kittens at the start of 2021. But, since our honeymoon was cancelled we thought we’d start looking early. And now here we are, the very happy parents of 3 little fur babies!

Once we decided we going to properly start looking to adopt, the process of finding the kittens was surprisingly quick. We registered with 3 charities, Cats Protection, Battersea and The Scratching Post. Within a few days, we heard back from The Scratching Post who wanted to do a virtual house tour with us. Thankfully we passed their inspection and were accepted into a private Facebook group where they post pictures and information of newcomers.

It was in the Facebook group where we spotted these 3 little cuties. A black male kitten and two female tabby kittens. Again, at this point, we were only really looking for two and the charity ideally wanted these three to be adopted together as they were all siblings who had really bonded. From the comments on the post, it seemed everyone only wanted to adopt two of the three. So, they were struggling to find a furever home. Of course, this made me so sad as they were absolutely adorable and we thought about what life would be like with 3.

After much consideration, and a few coin flips, we decided to just go for it! We sent a message and the next day, Tuesday, we learned that we were still available so we raced down to the charity to view them.

Seeing the Kittens for the First Time

I was so excited to see them. I remember when my family and I adopted Gaston, viewing all of the kittens was the best part of the process. There were so many adult cats and kittens around at The Scratching Post it was difficult to not adopt them all! We saw a group of 3-week old tabby kittens and my heart broke. We also saw the cutest little ginger and black and white kitten too. I really hope they all find homes soon!

But, our attention was drawn to the 3 little ones we saw on Facebook. One of the volunteers brought them outside in a big, outdoor pen for us to play with and get to know. Of course, they were all shy and cautious to begin with but we instantly fell in love with them. They were so tiny at just 9-weeks old!

We let the charity know that we wanted all three, paid the donation fees and it was confirmed! We had to wait a few days before we could pick them up as they had to have injections and health checks done first. It was the longest few days of my life but so worth it.

What we Named Them

Tuesday night, after seeing the kittens, we had the very difficult choice of choosing their names! We made a huge list of potentials, including some of our favourite Animal Crossing characters, movie characters, Disney characters and famous trios. When our original plan was to adopt two kittens we always imagined calling them Thor and Loki. We still really wanted that so we adapted.

We settled on calling the black male Loki as planned and one female tabby Thora. This worked out really well as it turns out those two are inseparable. The other female tabby we called Meeko. I’d always wanted to have a pet called Meeko. I think it’s such a cute name and it’s one of my favourite side characters ever in a Disney movie. Pocahontas in case you were wondering. I also thought Meeko would work well for a girl too. This name also fits pretty well as she’s much more independent than the other two and loves a little snack.

On Sunday we finally got to bring them home! And it was an exhausting day. Everything in the house was ready. We had bought all the supplies, toys, a cat tree, tons of litter etc. We wanted to introduce them to a small, cosy room with lots of little hiding places for them to feel comfortable so we put them in the living room.

They were very nervous as we let them out and left them alone to explore. They sniffed around the living room before immediately hiding away behind the tv. We left them there for a little while before enticing them out with food and other treats. It was very hard to be patient when all we wanted to do was play and cuddle them. But, after a few hours, they started coming out of hiding and exploring more of the room.

1 Week with Thora, Loki and Meeko

We’ve now had them for a week tomorrow, although it feels so much longer than that! There’s been a few litter mishaps…on our brand new carpet…but that was to be expected with such young kittens haha. They are much more confident now and have explored pretty much most of the house. The only room they have not been allowed in is the room where my wedding dress currently is, for obvious reasons. After the wedding though they will have full access to the house.

Meeko and Loki are definitely the most comfortable ones and they’ve started to accept us as their humans. They let us pick them up and stroke them pretty much whenever we want, they’re very playful and have been purring quite a bit lately whenever we give them a cuddle.

Thora on the other hand is taking quite a bit longer to settle. She’s still very nervous around people and cries a lot if her brother or sister isn’t around with her. She’s just starting to accept some very gentle strokes but not often. But, out of the 3, she is the most playful. She loves playing with toys and play fight and chase her siblings. She does have a bit of a health condition, a very small hernia, which could be causing her some discomfort. But they will be sorted when they go and get neutered and microchipped. Thora requires a lot more patience than the others but hopefully, we’ll get there and she’ll feel right at home.

I hope you all enjoyed this cute new kitten adoption post! Let me know in the comments if you have any cats and what they’re called. Or, if you have any advice on how to get a shy cat to feel more comfortable let me know.