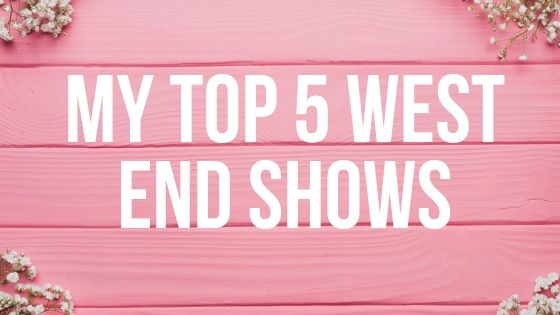 I am a big lover of musical theatre and have been lucky enough to see many West End shows in my lifetime. Musical theatre makes my heart happy, it’s the perfect escape and the score always hits me right in the feels! There are five West End shows in particular though that have stood out the most and that I would happily watch over and over. Some of these shows I have seen multiple times now and still feel just as excited as I did the first time watching them.

Les Mis is my favourite show of all time. It’s absolutely incredible and a must see for everyone! I’ve seen it 2 or 3 times in the West End now and will be seeing it again this November with the star-studded cast of Alfie Boe, Michael Ball and Matt Lucas which I cannot wait for! Les Mis is non-stop music and singing from start to finish and has such iconic songs. I never tire of this musical.

Blood Brothers is the show I’ve seen the most on this list and it never fails to make me cry. It’s an amazing story of two twin brothers separated at birth and how they’re lives went in completely different directions. The song and dance numbers are fantastic and this show will have you laughing one minute and ripping your heart out the next. The first time I saw Blood Brothers it was in the West End but unfortunately it’s final performance was in 2012. The show does tour around the UK fairly often and a new tour has been announced for later this year.

For those who are new to the world of musical theatre, The Lion King is always the show I will suggest to see first. It’s bright, loud, colourful and has very clever staging and puppetry. The Lion King is a show that you can’t take your eyes off. It’s completely mesmerising and perfect for both adults and kids to see.

Phantom of the Opera

I saw this for my birthday for the first time a couple of years ago and would love to see it again! Everything about it was incredible, from the costumes and the set to the story and obviously the talent of the actors. I was completely blown away, especially during my favourite song Masquerade. There is a sequel to this show called Love Never Dies which I would also like to see one day.

Stomp is probably the most fun west end show I’ve ever seen. It’s funny, playful, energetic and the choreography is pretty mind-blowing. The cast dance and make music with everyday items such as lighters and metal bin lids, there’s also a bit of audience participation which is always fun! Again, unfortunately, this show closed in the West End in 2018 and as far as I’m aware is not currently touring the UK, but hopefully, it will return at some point in the future.

There are so many more West End shows that I want to see. Matilda, The Book of Mormon and Aladdin are high on my list. You can bet that when I finally make the move to London I’ll be seeing a lot more shows and dragging Jaz along too!

What’s your favourite West End show? Let me know in the comments!