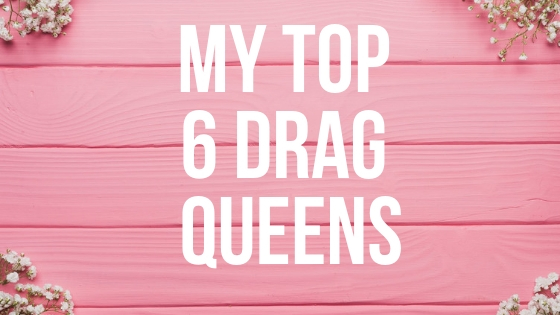 At the beginning of the year, I was persuaded by many people to watch RuPaul’s Drag Race, after I’d clearly been living under a rock for the past 10 years, and I wish I’d watched it sooner! I binged all 10 seasons in about 2 months, just in time for season 11 and, obviously, loved every second. Throughout all the seasons there were 6 drag queens in particular that really stood out to me and whose lives/careers I followed after the show.

My top 6 drag queens are:

Bianca Del Rio is without a doubt my all-time favourite queen! Sassy, talented, funny, cold on the outside but one of the sweetest, most supportive queens to appear on the show. She helped out so many younger queens and was there for them when they needed support. In my opinion, Bianca is definitely the funniest queen to have ever been on the show and her Judge Judy impersonation for snatch game was amazing!

Large and in charge, chunky yet funky, Latrice Royale was definitely one of the most memorable queens! She was really funny and had such an infectious smile/laugh. Latrice really stood out in the acting challenges too, especially the iconic jail scene, ‘get those nuts away from my face!’ I cried at her elimination and wished she had made it into the top three but was really glad she got the Miss Congeniality award, she definitely deserved it!

I adore Adore! She was so cute and likeable and really grew as a person while on the show. I loved her style of drag and thought she was super talented. Adore was just such a mesmerising queen to watch. She had such a great sense of humour and the friendship/bond between her and Bianca was adorable. Season 6 was definitely the best season for me and both Bianca and Adore were joint winners in my eyes.

Okay, so I know this is a very controversial queen to like. Phi Phi O’Hara was pretty brutal, she did a lot of backstabbing and received a ridiculous amount of hate after the show.  But I still can’t help but like her. She was a beautiful queen, her looks were amazing and while she did say some terrible things I think the show was edited to make her look more like a villain. Whether you like her or not there’s no denying that she was a fierce queen and one that stood out amongst the rest.

Where do I even begin with Willam?! As the only contestant to get kicked off the show for breaking the rules Willam definitely brought the drama and was so entertaining to watch. Smart, witty and hilarious Willam had some amazing one-liners and despite being totally narcissistic I found her to be really likeable. I feel like if Willam hadn’t been kicked off she could’ve taken the crown easily.

Eureka is honestly such a talented queen! While many contestants found her annoying I thought she was so funny and her acting roles were incredible. She was such a big, memorable character and definitely stole the whole season. She put everything she had into every challange and her snatch game was one of the funniest. Eureka was the real winner of season 10.

Are you a RuPaul’s Drag Race fan? Who are your favourite drag queens? Let me know in the comments!

Disclaimer: All images were found on Google images. I do not own any of the images shown in the post.