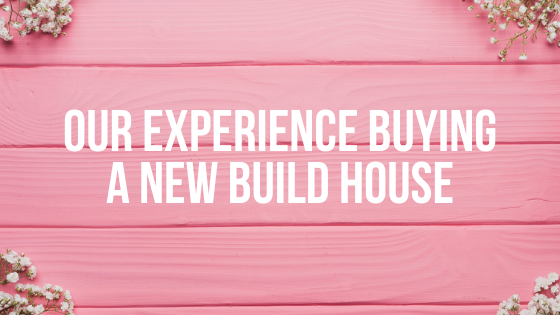 I’m sure by now pretty much all of you know that at the end of August we moved into our very first home together. While everything seems great and we’re loving the house, it was not an easy ride. Over the last two years, we’ve had countless ups and downs. And, in today’s post, I’ll be telling you all about them and our overall experience with buying a new build house.

We started looking for a house in 2017/2018, which feels so long ago now! As we were using the ‘help to buy’ scheme we had to find a new build house as most pre-owned houses don’t accept the scheme. We started looking around at many different developments in Essex before finding this one. At the time, we were told that everything they had available was sold out. We were disappointed but moved on.

A couple of months later, I decided to check the website of this particular development to see that more houses had popped up for sale. We hadn’t really found anywhere else we liked so Jaz got on the phone with them and set up a meeting. Of course, I was still in Somerset at the time so it was very tricky for me to travel to Essex as often as we needed. But, after seeing the plans for the house and the development, speaking to the sales and marketing team and going on the good, gut feeling we had, we reserved our first plot on the 28th of October 2018. We were told that the house would be completed and ready to move into by May 2019 so we were both very excited.

Just a few days later, we got a letter confirming the reservation. It was in this letter that I spotted a glaring mistake. In this letter, it stated that the house would be completed in 2022. Yup. 2022. 2 years after our wedding and 4 years after we’d reserved. Obviously we were both confused, upset and angry. If we had been told this we wouldn’t have chosen it. So, we got on the phone right away to get it sorted. This delay came from the fact that their building compound had to move and demolition was taking longer than expected. So, the original house we reserved would be the last ones built.

Thankfully, the developer was pretty accommodating and we were able to change our plot. This did mean that we had to choose a different house style though which I was pretty upset about. But, the house we chose was actually the better choice in the end for a number of reasons. And we didn’t have to pay the difference either which was great.

Fun fact: Those houses actually ended up being built first, which we were never told, with people moving into them in June 2020. I’d be angrier about this if we didn’t prefer our current house.

After we officially reserved the new plot, we were told that we’d be exchanging in about a month’s time. So, of course, we got all the paperwork ready and sent off in a timely manner. But, this never happened. Everything on our end was done. For some reason, unknown to us, there was a delay on their end. We were supposed to exchange contracts in December and got very worried as December came and went. After countless calls and emails, we finally exchanged in February.

Just a few days after exchanging I got fired from my job. It was a long time coming and I was extremely close to quitting rather than putting up with the daily abuse I got from the director of the company every single day. The only reason I stayed, was because I didn’t want to risk messing up the mortgage offer. Luckily, I got a new, freelancing job a week later, so money-wise we were unaffected and I was so much happier being out of a dead-end, soul-sucking job.

During April both Jaz and I were getting very excited thinking we were moving the next month. I started packing and Jaz started buying things. However, we thought it was a little odd that no one had contacted us regarding the completion, so we didn’t want to get our hopes up. Jaz contacted the developer who told us that the date had been pushed back until June/July. This was a little annoying, especially as no one called to let us know, but we dealt with it. I got a new, temporary job to get a steadier income and we carried on.

June passed and the middle of July arrived. Still no news on the house. At this point, I was becoming pretty pessimistic about the whole thing. We were then informed that the house would be ready in September, that they were having trouble with suppliers. From a legal point of view, they were in their right to delay the house. But, if they delayed it again we would then be able to pull out of the deal. This was something we were strongly considering if we weren’t in the house by September.

Guess what? August came and the house was nowhere near ready. Jaz told me over the phone that the developer had once again delayed the house until December. I remember just bursting into tears because I was so frustrated with everything. We were told that we’d move in on Christmas Eve. While it wasn’t the perfect scenario I let myself feel hopeful that we could at least spend Christmas in the new house.

Somehow, they messed up on the plans and discovered some live electrics where they didn’t realise. This meant it was going to be a few more months while they fix and move things around. Just as we were looking at our options to pull out and start back at square one, looking for a new house, the developer gives us a call. They offered us a new, better plot as compensation that would be ready in April 2020.

We reserved the new plot. But, just a few days later an even better one became available. The better one was semi-detached, rather than end-terrace, was south facing so the sun would always be in the garden from mid-day onwards and had solar panels. The only problem was, this house wouldn’t be ready until June 2020. After discussing it we decided to go for the better plot. It seemed to make more sense to go for the better house that had easier selling points which would become handy later on in life.

It was another 2-month delay but one we were actually prepared to make for a better house. We also didn’t have to pay any extra and we got all of our carpeting thrown in for free plus £3000 toward any other finishing touches for all the trouble we’d been through. So, we’ve worked out, that before even moving we’ve made around an extra £30k on this house.

Of course, we all know, in March 2020 we were hit by Coronavirus and everything was put on pause. This was a real pain as we were getting so close to the house! But there was nothing anyone could do but wait. Around mid-may, the builders started work again, but only 1-2 builders per house were allowed so things were progressing at a slower rate.

At this point, I was living in Essex with Jaz, his dad and his brother. Lockdown was making me very miserable, being stuck in a house with 3 boys and no escape was not easy! So, I made the decision to move back down to Somerset, with mum, my sister and my cat until the house was finally ready.

During August we finally got the phone call saying the house would be ready to complete and move into in just 2 weeks time! After everything we’d been through though, I struggled to get excited. I was convinced something else would delay it. A strong gust of wind, an unexplainable fire, a pest infestation. Every bad scenario ran through my head until the day we were handed the keys.

We’ve now been in the house for a month and it’s been amazing. We’ve had a few small problems but nothing that can’t be fixed. And as we do still live on a building site, getting things fixed is pretty quick and easy.

I think it’s safe to say that we haven’t had an easy journey. But, everything does happen for a reason. All of the delays and the plot changes have landed us in a much nicer, better, bigger house than we could originally afford and we’re very happy here. If you’re thinking of buying a new build house, do be warned that anything and everything can go wrong and to take all the dates they throw at you with a pinch of salt.

Also, don’t be afraid to be on their case constantly. Make demands, call them relentlessly, ask for updates all the time, otherwise, they just won’t bother. We actually threatened to go to the press with the amount of grief they had caused, which sped the build up tremendously. We also had the name and number of the head of the south division and received weekly updates from him. It’s definitely worth being a pain in their ass.

Let me know in the comments if you’ve bought a new build house recently and if you had any troubles.