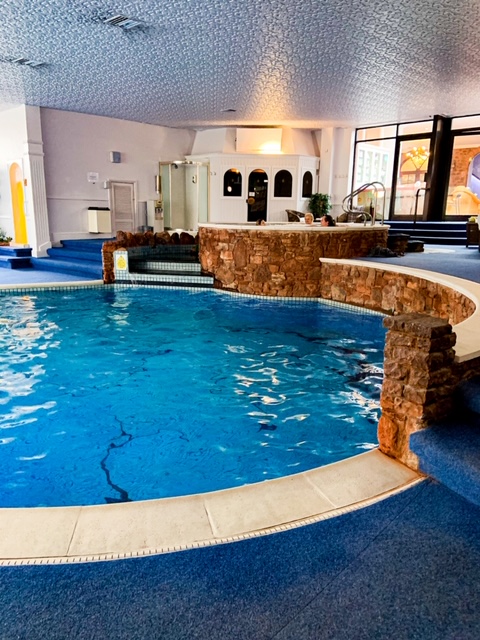 Can you believe that I’d never been to a spa before? Well, last weekend I experienced a spa day for the very first time at Cedar Falls Health Farm and Spa in Taunton and now I’m desperate to go back!

At 11:30am we arrived at Cedar Falls Health Farm and Spa and, after filling in some paperwork, were given a tour of the place. The spa is in a really lovely location in Somerset. Surrounded by 44 acres of land, lakes and gardens, it definitely felt peaceful. We were shown the dining room where we’d be having lunch later, along with the games room, pool, treatment rooms, changing rooms and a couple of shops.

After the tour, we were then given super cosy robes, some slippers and towels. Eager to explore we quickly got changed into our swimwear with the robes covering us and headed straight toward the pool area. It did feel kind of weird wandering around this fancy look spa in just our robes and slippers. But, obviously, everyone else was too. There were even a couple of people just casually walking around in their PJs, looking like the ultimate picture of comfort!

We spent quite a long time in the hot tub. I don’t think I’ve ever really been in one before but it was incredible. I’m now fully convinced on getting one for our house! ?

We also spent a long time in the pool too and just lounging around on the chairs they had in a conservatory next to the pool. Swimming is one of my favourite fitness activities to do so I really made the most of that pool.

At 12:30pm my mum went off to have her treatment. She was having something called an aqua float which sounded amazing! From how she described it she was lying on a water bed for about 20-30 minutes that gave her a full body massage. If I ever go back to Cedar Falls Health Farm and Spa I’ll definitely be treating myself to that!

Before we knew it, it was time for lunch which I was very excited for. To start with we had some tomato and red pepper soup. This was very much needed after getting out of the pool and feeling very cold! There was also a buffet full of fruit, vegetables, cold meats, salads and some quiche. Of course, we filled our plates up but made sure to save some room for dessert.

After lunch we decided to spend some time in the games room. Charlotte, who’s currently obsessed with puzzles kept herself very busy while mum and I decided to attempt to play chess. I hadn’t played chess since primary school so I had no idea what I was doing or what the pieces were. Obviously I lost haha.

When it was nearly time for my treatment I wandered off to a waiting area where they had comfy beds in little pods. It was really hard to not just fall asleep there haha. Instead of succumbing to the nap I played Animal Crossings on my Nintendo DS for a little while and then read a bit of my book.

I also then spent some time in one of my favourites rooms…the beanbag room! That’s right, a whole room just filled with beanbags. It was as incredible as it sounds. That’s now another addition I want to make to the house haha.

Like I said before I’ve never been to a spa. So, when it came to the treatment I was a little nervous as I didn’t know what to expect. I was having a dry float which is supposed to relieve stress on joints and muscles and encourage a night of deeper sleep. With my new job, the wedding and our house move coming up soon I definitely needed some relaxation and better sleep!

I entered the room where there was a waterbed that I had to get onto once it was fully inflated with hot water. Once I was on the bed with the towel over me the woman came in, wrapped me up and left again for 20 minutes. Imagine being wrapped up in a hug with a giant hot water bottle. That’s exactly what this felt like and it was lovely!

At first, I thought it was weird and awkward and I didn’t really know what to do. But then I started to just relax. I closed my eyes and ended up having one of the best naps of my life. I did not want to leave that cosy cocoon of warmth! When the woman came back in to tell me my time was up I was so disappointed haha.

This treatment is said to be the equivalent of 3-4 hours rest and I can definitely see why. I felt so refreshed and content afterwards! I’d 100% recommend having a dry float.

For the rest of the afternoon, we alternated between the pool and the hot tub until it was time to leave. None of us wanted to go back to reality. We could’ve happily stayed there for days!

Our day at Cedar Falls was amazing. I feel like I’ve really been missing out on these spa days and now have a lot of catching up to do! It was the most relaxed I’ve felt in a long time and was definitely needed. Life seems to be extremely busy, chaotic and stressful right now so having a day to completely switch off was perfect.

if you’re in Somerset I’d really recommend taking a visit to Cedar Falls, you won’t regret it! I know I’ll be going back again in the future, maybe when the wedding is getting scarily close haha.

I hope you all enjoyed this post. Let me know in the comments if you’ve had a spa day before?