The Struggles of Being Shy and Socially Awkward 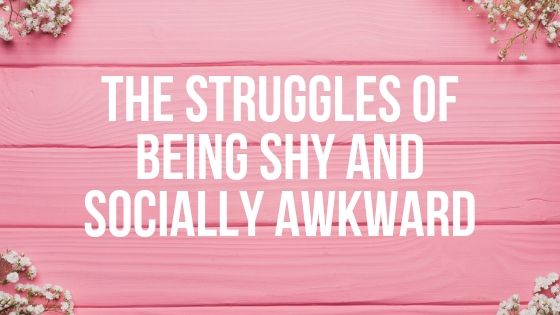 I have been shy and socially awkward my entire life. While I’m perfectly okay with this it definitely does cause some daily struggles.

Please do not ask me about the weather or how I am because it’s a completely dead-end topic of conversation. Very often people have asked ‘how are you?’ which is a normal question to which I reply ‘good thanks.’ Then my mind goes blank and I start to internally panic, I know I should ask how they are too but I forget and overthink and too much time passes for it to be socially acceptable, therefore the conversation has been killed and I feel guilty for not asking them how they are. It’s probably best to avoid any kind of small talk with socially awkward people, just say hello and move on.

Before making a phone call I have to write down exactly what I’m going to say, and if the person on the other end of the call deters from my pre-written script then some mumbled nonsense comes out of my mouth instead. If someone calls me I will always let it go to voicemail, listen to the message and again carefully plan what I’m going to say before calling them back. For the sake of all socially awkward people out there please just send us a text or an email. Phone calls are scary!

Parties or social gatherings fill you with dread

While we can get out of most social gatherings there are some that are completely unavoidable. For example, earlier this year I was invited by my fiance’s family to go to a kid’s birthday party. The day started off well as we set up the venue but as the party began and more and more people arrived I found myself sticking to the wall at the edge of the room. I would not budge unless my fiance or someone literally dragged me away! At the end of the day, I felt like crying because I wanted so badly to just talk and get to know more people on his side, but I physically could not move away from the wall.

Being quiet does not mean we are rude, stuck up or b*tchy! We just get really, really nervous when it comes to talking to people. Not many people understand this and instead think we just don’t like them/don’t want to talk to them which isn’t the case at all!

Starting or holding a conversation is incredibly difficult

I will never, ever start a conversation with someone. I just can’t do it. Instead, I wait until someone introduces themselves or starts a conversation with me. I realise that sounds pretty self-absorbed, but I’m just not brave enough to approach someone and start talking. In fact, the people I get along with most are the ones who can constantly talk without needing me to contribute much. I can just nod and listen and laugh and occasionally input something which is the ideal situation for any shy person.

People constantly try to get you ‘out of your shell’.

For some reason, people think shyness can be cured! If one more person says to me ‘you just need to come out of your shell’ I’ll really go off. (In reality, I’ll just sit there and nod and smile but will be raging inside.) This phrase is definitely my most hated phrase. I’ve been fired from jobs before because I didn’t ‘come out of my shell’ enough despite being in my happy bubble and producing good work. Why is it that us shy/socially awkward people need to change ourselves to fit in? Why can’t we just be accepted?!

You worry you’ll annoy people if you speak

I know I know, it sounds ridiculous but part of the reason I won’t talk as much is because I don’t want to irritate people. If I’ve spent a lot of time with someone or have spoken quite a bit I’ll think they’ll need a break from me and will pull away. This applies to social media too. You’ll see me liking tons of tweets and Instagram posts but rarely making any comments because I don’t want to annoy them.

Others find your quietness uncomfortable

It takes a special kind of socially awkward person to be so quiet they actually make others uncomfortable. I am this special kind of person. Other people don’t really know what to say to me anymore. One of my biggest pet peeves though is when someone asks ‘why are you so quiet?’ This question is usually met with a blank stare and a shrug. I beg of you, please do not ask a shy or socially awkward person why they’re like that. Just accept them for who they are.

You stop yourself from doing things you want

We are extremely self-conscious of anything we do. If someone so much as glances me while I’m eating I’ll stop. If I’m in the gym and make eye-contact with someone I’ll convince myself that they’re laughing at me because I don’t know what I’m doing and I’m a little on the chubby side. Being shy and awkward stops us from doing many things we want. You won’t see me singing karaoke or dancing in a club or ice skating at Winter Wonderland despite wanting to do these things. It just won’t happen.

People often forget about you

Fun fact, I once got fired from a job because people forgot I was even there. I learned in school that people forgetting you’re there can be both a blessing and a curse. While I had zero friends and no one would talk to me I also overheard so much gossip and drama and secrets. Obviously, I’m not the type of person to use that to my advantage but it was definitely entertaining.

Are you shy or socially awkward? Let me know in the comments some of the things you struggle with most.