I have loved Disney movies for as long as I can remember, like most people I grew up with them. I sang the songs, had the toys and dreamed of being a princess! With the live action remakes increasing in popularity I thought I’d make a list of my top ten, animated Disney films. 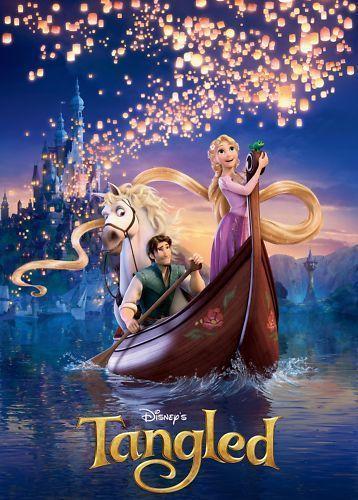 Rapunzel is, hands down, my favourite princess (and ultimate hair inspiration). She’s fun, daring, ambitious, quirky and never gives up on her dream. It’s a lighthearted, funny movie and I love the rivalry between Flynn and Max their facial expressions and smugness at agitating each other makes me laugh every time. The animation is also beautiful, I think the lantern scene is one of my favourite movie moments.

Mulan is definitely one of the strongest, powerful and courageous female characters in a Disney movie. I mean she saved the whole of China! I can’t wait for the live remake to come out, although I am a little disappointed in the rumours that they’re cutting the songs Captain Li Shang! But I have faith in Disney and I’m sure they won’t disappoint.

When I was very young I apparently insisted on having this movie playing on a loop all day, resulting in my mother being able to quote practically the entire script. I just couldn’t get enough of Baloo and Bagheera’s antics, the adventure, the songs, everything about this movie is amazing! I also really loved the remake but in my opinion the animated version is still the best one.

Pocahontas features my favourite animal sidekick, Meeko. I adore Meeko. He’s  cute, mischievous, protective and the relationship between him and Percy is hilarious. This film can be quite controversial with the historical inaccuracies but even so the story is engrossing and portrays the message of peace, fighting ignorance and love for the planet and each other. All of the songs are excellent, ‘Savages’ gives me chills every time, and the animation is beautiful! It’s a fairly underrated film in the Disney world but it’s always been a favourite of mine.

Cinderella is a classic tale that, for me, never gets old. Who can honestly say that they didn’t want to be Cinderella at one point in their life? I know I still do sometimes! The scene were she transforms from wearing rags to that gorgeous dress is so magical and was actually Walt Disney’s all time favourite scene. It’s a film that I like to put on when I need to feel happy or hopeful, just hearing ‘A Dream is a Wish your Heart Makes’ can instantly lift me up. Everything about this movie is truly enchanting.

I love this movie so much I’ve decided that if I ever have a son his name will be Tarzan, getting my boyfriend on-board with the name is proving to be a bit more difficult than I thought but I’ll get there haha. Tarzan is full of action, hope and love. It does have it’s heartbreaking moments, that first scene with his biological parents and the gorilla just gets me every time! Other than that though it’s a fun, feel good movie with an uplifting soundtrack.

101 Dalmatians is one of those movies that I can easily watch over and over and never get bored of it. Honestly I’m not a huge lover of dogs but if I were to ever get one it’d have to be a dalmatian! Cruella De Vill is one of the scariest, awful but brilliant villain! She’s one that we all love to hate and the song that Roger writes for her is just so damn catchy. The puppies are adorable and one of my favourite parts is where they all make themselves dirty to go traipsing through the snow without being recognised. This movie never fails to bring a smile to my face.

8.) Beauty and the Beast

This is arguably the best Disney movie of all time. It’s a classic and I don’t know anyone who dislikes this film. Every character is lovable, even the villain, Gaston, who my cat is actually named after. Belle herself is a refreshing princess that a lot of people can relate too. The animation is stunning, the stained glass window and gold dress were the huge stand out moments from me. My blog name was also inspired by this movie! I was blown away by the live remake of this movie, it’s definitely the best one yet and I highly recommend it.

I have a pretty big soft spot for Peter Pan. As a child I had a major crush on him, even more so in the live movie with Jeremy Sumpter. There’s just something about that boyish charm that I was always drawn to. This film is full of action and adventure, great songs, fairies, mermaids and pirates, there is something for everyone and what’s not to like?! Last year I almost got a tattoo of the second star to the right but chickened out, although I am still considering it. Peter Pan will always be special to me.

Last on this list is The Little Mermaid. I loved both this movie and it’s sequel and like many others dreamed of becoming a mermaid princess. This movie has probably the best soundtrack in my opinion, ‘Part Of Your World,’ ‘Poor Unfortunate Souls’ and ‘Under the Sea’ are all completely fantastic! Ariel is a very likeable character and I think we can all agree that Prince Eric was the most handsome of all the Disney princes. I personally feel like this movie is flawless.

This was such a hard list to make as there are so many Disney movies I love! Special mentions go to The Rescuers, The Fox and the Hound and Aladdin. What are your favourite Disney movies?