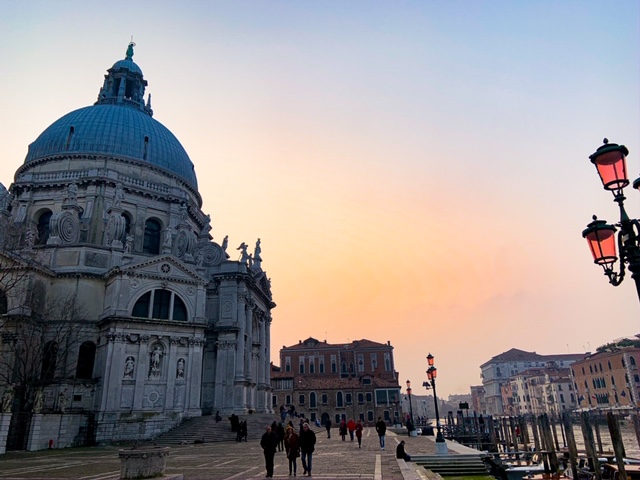 It’s time for 5 days in Venice, Italy part 2! Today’s post focuses on the last 3 days of our trip to Venice, Italy which includes a prison tour, afternoon tea at the oldest cafe in the world and of course more delicious food!

On Sunday my sister turned 21 so the day started with a little present opening session. My mum and I had also arranged a little surprise for later on in the day which my sister had no idea about.

Once we filled ourselves up on another big breakfast we then did a bit of shopping where we all got brand new Italian leather handbags. Then we made our way over to St Mark’s Square as we had a tour of the prison booked which I was really excited for.

The prison tour was really interesting. It was actually the prison where Casanova famously escaped in the 1700s with the help of a monk who made a hole in the roof of his cell for Casanova to escape through and flee to Paris. Casanova was the only person to ever escape from the prison as the guards and the conditions were absolutely brutal. Approximately 20 people were together in one small cell. Sharing one bucket, one bed and only being allowed one pail of water and one piece of bread a day. The average life expectancy of the prison was 3-5 months.

The women in the prison arguably suffered even more. As all the guards in the prison were male the women were often taken advantage of. They were also chained to the walls as many people thought they were witches and could fly through the walls.

We also got to see the Bridge of Sighs which prisoners would walk over on the way to their execution, take a look at the views of Venice one last time, and sigh at its beauty.

Nowadays the prison is used mainly as an arts centre, with classes and events going on all throughout the year. In fact, they even have a piano that was gifted to them by Adolf Hitler who apparently was a big fan of the arts.

The tour lasted about 45 minutes and cost us 10 euros each which we all thought was really good. It was a great tour and I’d definitely recommend it if you’re going to Venice!

As an extra birthday surprise for my sister, my mum and I had planned to have afternoon tea in Caffe Florian, the oldest cafe not only in Venice but in the world, dating back to the 1700s. Caffe Florian has always been the place to be and was frequently visited by the likes of Charles Dickens, Lord Byron and Marcel Proust. Even now the cafe was packed full of people in incredible costumes with many passer-bys looking in the windows trying to get pictures.

We definitely felt a little out of place to begin with as we weren’t in costume, but everyone inside was so nice and the waiters were very welcoming. The decor inside was absolutely outstanding and transported you right back to the 1700s. We ordered 3 afternoon teas which were delicious, I also had a hot chocolate tea as I’m not actually a fan of tea and it was the richest, thickest hot chocolate I have ever had.

Having afternoon tea at Caffe Florian felt like a once in a lifetime experience. It was incredible and worth every penny. We felt so special and fancy and the whole ambience of the place was just fantastic. I think it was probably the biggest highlight of the whole trip. If I ever went back to Venice I’d have to try and eat here again.

That evening we looked at the amazing buildings in St Marks Square and then decided to wander over to the Rialto Bridge which was just beautiful at night time. These were some of my favourite pictures I took.

Monday was our last full day to explore and because of the Coronavirus outbreak, all of the main tourist attractions were closed. The carnival also had to finish early but there were still people out and about in full costume. Despite all the panic and the worry, we weren’t going to let the virus ruin our last day. We were armed with lots of hand sanitiser to use throughout the day and Venice wasn’t one of the quarantined areas. I believe the schools were closed though as there were lots of children out playing football.

The first place we wanted to explore was the Giardini della Biennale, a relaxed garden that often hosted art exhibitions. It was really nice just to leisurely wander through the parks and along the canal.

Once again we got lunch at Farini which very quickly became our favourite place for lunch as it was affordable, filling and tasty.

After that, I really wanted to go Basilica di Santa Maria della Salute. It was a beautiful Roman Catholic church that I kept seeing from a distance. It was without a doubt the most beautiful building I’d ever seen! The church was built in the 1600s and the architecture was stunning both inside and outside.

That night, instead of going to a resturant we decided to go to a pasta takeout place. I got a spaghetti carbonara in a cardboard box that was definitely tricky to eat haha but tasted amazing.

Tuesday was sadly our last morning in Venice. We were all tired with aching legs and feet having walked a total of 90,000 steps in 4 days haha. While we were excited to go home we were also sad to be leaving such a beautiful place. We spent the morning going into shops for any last minutes purchases and taking in the gorgeous views. Of course, we also had lunch for the last time in Farini. Even though we were full up we still had to get one last ice cream. We’d had ice creams every day, sometimes even twice a day, as they were amazing, so we definitely needed one more before we left.

I loved every minute of our trip and would definitely go back to Venice again. I’d love to explore other parts of Italy too. It’s such a beautiful country and the food was just to die for!

Have you ever been to Venice before? Let me know in the comments.